SpaceX says it wants to save NASA money, but its actions could cost taxpayers more in the end.

Building a spacecraft is about managing various forms of risk: the risk of hardware failure, software errors, design flaws, you name it. But the project managers of Lucy, an upcoming NASA mission to distant trojan asteroids, face a new type of risk: the risk that they could miss a launch window due to legal battles between rocket companies.

On 31 January, NASA's Launch Services Program announced that it had awarded a contract to United Launch Alliance (ULA) to launch Lucy into space. The company's Atlas V-401 rocket, the same configuration that launched MAVEN to Mars, was selected for a cost of $148 million.

SpaceX, which had proposed its Falcon 9 rocket for the same purpose, filed a formal protest with the Government Accountability Office (GAO) 11 days later, triggering a formal review. In response, NASA issued a stop-work order to ULA while the contract is under review, which could take as long as 3 months.

SpaceX justified its protest by saying that the company "offered a solution with extraordinarily high confidence of mission success at a price dramatically lower than the award amount, so we believe the decision to pay vastly more [to ULA] for the same mission was therefore not in the best interest of the agency or the American taxpayers."

People familiar with the Lucy project emphasized that mission planning continues despite the launch vehicle uncertainty. However, the uncertainty about which rocket they will use makes it difficult to optimize the spacecraft design to maximize its performance and minimize its fuel use. According to a GAO report on major NASA projects from 2018, Lucy has passed its preliminary design review and its team is working to finalize its design specifications ahead of entering the most complicated (and expensive) phase of the mission: the period where the hardware is built, integrated, and tested. Knowing the launch vehicle is an important part of mission planning at this stage. 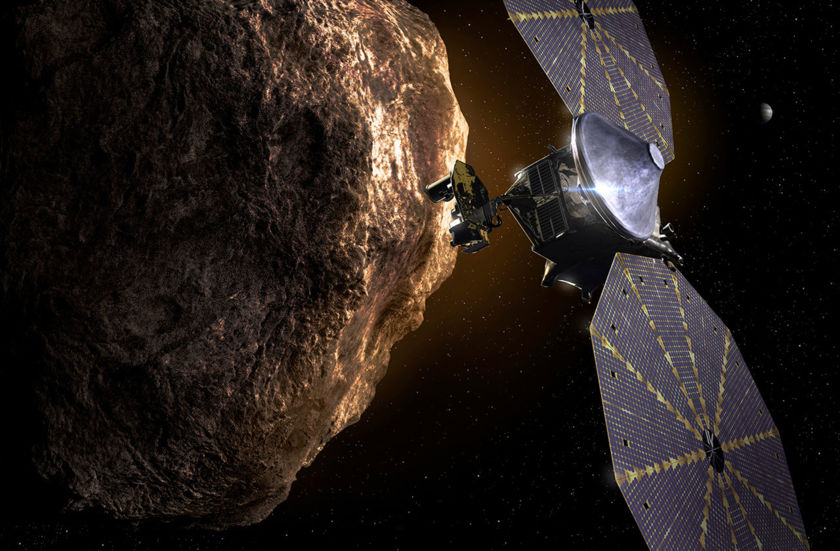 NASA's Lucy mission will explore six Trojan asteroids, a unique family of asteroids that orbit the Sun in front of and behind Jupiter.

Lucy must be ready in time for a 20-day launch window that opens in October of 2021. If the GAO rules in favor of SpaceX, the most likely outcome is that the launch contract will be re-opened for bidding. The recompeting this process could take upwards of 6 months, which, combined with uncertain spacecraft integration requirements, could cause Lucy to miss its 2021 launch window.

Numbers are not forthcoming at this stage, but we can look to past examples of mission delays to get a rough sense of their cost. NASA's InSight mission infamously missed its 2016 launch window due to quality issues with a major scientific instrument. Like Lucy, InSight was a Discovery-class planetary mission. Its resulting 2-year delay added $154 million to the cost of the mission.

It's reasonable, then, to assume that an additional year delay of Lucy would cost NASA in the neighborhood of $75 - $100 million. This additional cost to the mission would likely negate any savings provided by SpaceX's Falcon 9 (costs tend to be higher than SpaceX's published costs for the Falcon 9 due to additional launch service requirements for government payloads). While we don't know SpaceX's bid for Lucy, the Falcon 9 launch of the DSCOVR spacecraft cost the government $97 million in 2015 and its launch of the astrophysics mission TESS cost $87 million in 2017.

In a statement to Space News, ULA emphasized its ability to stick to launch schedules, implying NASA's choice of the Atlas V over a Falcon 9 was driven by Lucy's narrow, 20-day launch window. SpaceX's argument is that their bid would save taxpayer dollars. But recompeting the contract could cause a launch delay, and ultimately cost NASA more in the long run. I reached out to SpaceX to get their thoughts on such a scenario, but they declined to respond.

Note: this article was updated to correct InSight's actual overrun cost of $154 million.

SpaceX is notoriously unable to stick to launch date schedule. Probably NASA took that into account and that is one factor as to why why they lost.

Unfortunately, this situation could become quite common as more launch vehicle companies come online. The bidding rules, including the protest process, will probably need to be reviewed and modified to take tight launch windows into account.

This article has some serious twisted logic. IF, I mean IF GAO rules in favor of SpaceX, it means NASA acted inappropriately during the bid selection process. And if this causes Lucy to miss its launch window, it would be entirely NASA's own fault, no one else would be responsible for this delay. If taxpayer is not happy with the additional cost, they should ask why didn't NASA act correct during bid selection in the first place.

It is more than just the extra money. If the GEO finds in favor of SpaceX, it would trigger an automatic Cancellation Review at NASA. Also, implementing the backup launch opportunity would require Congressional reauthorization for Lucy. The science is at risk. That is more important than which vendor gets the bid.

Mr. Dreier, What would it take to get a petition started by the Planetary Society, asking SpaceX to drop the protest in the interest of not delaying this mission?

I am all for making the best decisions that overall benefit the mission. Consider why NASA chose to not take SpaceX up on their first offer, maybe there are reason that balance the decision. Overall, delaying this entire process to save money the first time around created more issues than were needed to begin with. Let us consider this as an example of more concerns we will run into with future private space exploration. Do not get me wrong, I am all about supporting NASA and private companies to assist in such operations, but how much are we willing to spend just to set plans in motion?