JWST heads once more unto the breach, dear friends

This is not the first time this has happened to Webb. Originally estimated to cost $3.5 billion, the project was restructured in 2010 with a new cost estimate of $8 billion for development and another $800 million for operations. While it survived a near-death experience after angry congressional appropriators proposed to cancel the project, every appropriation since has stated that "the formulation and development costs for the James Webb Space Telescope shall not exceed $8,000,000,000."

Despite these emphatic congressional "shall nots," it appears James Webb shall.

It is very unlikely that Congress will cancel this mission. All of the hardware is built—it just needs to be pieced together and tested. But this phase of spacecraft construction (Phase D in NASA management parlance) almost always reveals hidden complexities and unexpected issues. Projects pad their schedules and budgets to accommodate these unknown but predictable problems, but the larger the project, the more complex the problems, and the more difficult the fix. One small issue can cause a cascade of delays, each causing more delays, which themselves delay other goals, and so on. In other words, James Webb's problems are "non-linear."

Because of this, NASA does not yet know exactly how much more money is needed to get the telescope ready for launch. The May 2020 date is a best guess based on current information. It could be later. We will know more by June, when NASA will submit its new plan to Congress.

Lee Billings at Scientific American has a good article highlighting some of the implications for the Astrophysics community given this new delay. But I want to focus on one major one: the future of WFIRST, the follow-on space telescope after Webb.

The Wide-Field Infrared Survey Telescope (WFIRST) is the top-priority astrophysics mission after the James Webb Space Telescope. It would use a Hubble-sized primary mirror to capture broad swaths of the sky in the infrared spectrum, and potentially unleash great new insights into dark energy and other important cosmological questions.

But this project was already facing significant programmatic headwinds after its own bulging cost estimates (to $3.8 billion), which moved the White House to propose to cancel the mission in order to shift funding toward its human lunar exploration initiative.

Astronomers are rallying to protect WFIRST by petitioning Congress to restore funding in the 2019 budget cycle, and for the mission to find cost reductions to make it more affordable.

Congress had already made a positive statement by providing $150 million for WFIRST in the  final fiscal year 2018 budget deal, which came after the proposal to cancel the mission. Along with the legislation, the official report on the spending bill stated that congress "rejects the cancellation of scientific priorities recommended by the National Academy of Sciences decadal survey process," a clear sign of support for the decadal priority WFIRST project.

As Thomas Zurbuchen, the Associate Administrator of NASA's science portfolio stated today, WFIRST is not another James Webb. He said comparing the two space telescopes is like comparing a Ferrari and a Chevy Malibu—they're both cars, but one is substantially more complex and expensive than the other.

To emphasize this distinction, he showed this comparison of the two projects at KDP-B, a project management goalpost that signifies the end of the planning phase before the project locks in a design and a formal cost estimate. Even without understanding all of the details, one can tell that WFIRST is substantially simpler than James Webb, requiring far fewer new technologies. 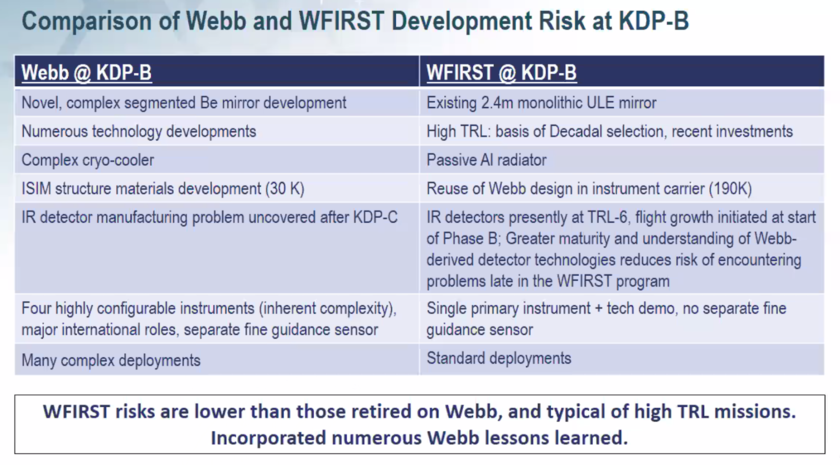 But here's the rub: even if WFIRST continues, its funding could be severely restricted by James Webb's cost overruns. As you can see in the chart below, the WFIRST project was counting on funding opening up as the James Webb project wound down. This "wedge" of new funding would allow WFIRST to continue even under a flat budget over the next few years, as is predicted by the White House. WFIRST needs something like $350 million in 2019 to continue as planned for a mid-2020s launch. James Webb was originally planned to decrease by $250 million in 2019, making that additional funding lift for WFIRST much easier. 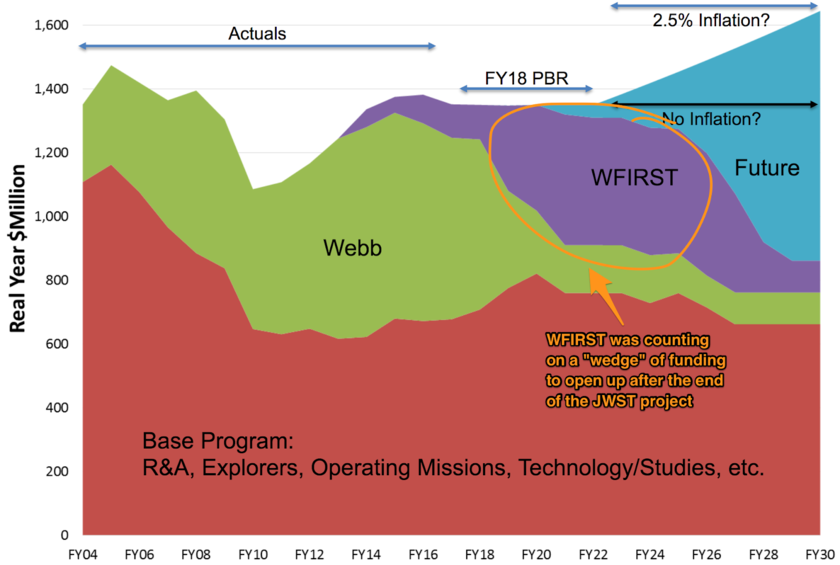 While we still don't know what Webb needs to finish, we know it won't be $0. The comparatively svelte InSight Mars lander added approximately $160 million to its mission cost after it missed a Mars launch window two years ago, on top of a budget of $675 million. Bigger projects like James Webb will have comparatively larger overruns, and even if it can dip into its planned operations budgets to soften the overall blow, the consequences will likely befall WFIRST, which is already teetering on the edge of cancellation.

There are a few paths forward:

And even one more aspect to consider: should the House of Representatives flip to Democratic control in the November elections, previous agreements on spending could be made moot by an ideological standoff between the parties. It's possible that no budget could be passed in 2019 and all programs would continue on a continuing resolution. This would have the effect of keeping WFIRST on life support, as a CR would prevent the cancellation of the project.

Until we know more, WFIRST continues to move forward with $150 million in 2018, waiting, like to rest of us, to learn more about the fate of James Webb.

Doesn't this problem have an extremely simple solution? Switch from a planned (but not yet contracted) Delta-IV Heavy launch - estimated price $435M - to a Falcon Heavy launch (~$100m). It of course requires certifying FH to launch it, but I'm sure SpaceX would be glad to work with them on that (e.g. if they need more launches under their belt, they could upgrade some of their upcoming launches from F9 to FH or whatnot - when there's a $335M price differential, there's a lot of room to work with). FH would also let them play as fast and loose with their mass budget as they wanted, or upgrade its capabilities (e.g. propellant budget / mission length, etc).

At $8 billion, the James Webb Space Telescope is not worth the price. What other science missions not done because of it? Of course it's too late to cancel it now, so let's do the best we can with it, if it is ever possible (considering the significant probability of a launch and deployment failure).

@Karen: perhaps you're thinking of Europa? JWST will be launched on an Ariane 5 rocket provided by the European Space Agency. There is also the issue of flight reliability—the Falcon Heavy is not yet approved to launch valuable NASA payloads, and may not be for some time.

@Casey Dreier - I'm talking about WFIRST, not JWST :) WFIRST is proposed to launch on a Delta-IV Heavy: https://wfirst.gsfc.nasa.gov/science/sdt_public/WFIRST-AFTA_SDT_Report_Briefing_to_Hertz_150219_Final_RevA.pdf Obviously JWST isn't going to be switching launch vehicles this late in the game! WFIRST isn't supposed to be launched until the mid-2020s. Also, as mentioned, when there's a price differential of $335M, there's a lot of room to work with for SpaceX to qualify FH for valuable payloads. The price differential between a F9 and a FH is only $20M. If $150M needed to be saved, that leaves $185M to put toward qualifying FH for valuable payloads. The cost differential between a FH and a F9 is $20M, meaning that even if SpaceX had to eat the cost itself, it could offer a free F9->FH upgrade to customers 7-8 times to get more FH flights under its belt. 8 launches (just ignoring all of the FH launches that SpaceX planned to do anyway) would bring it up to the same number of launches as Delta-IV Heavy. But even without that, SpaceX plans *at least* two more FH launches (the Air Force launch in June that includes Light Sail 2, then ArabSat 6a later in the year). I wouldn't be surprised if they catch up to Delta-IV Heavy in number of launches in early 2020. But they could easily accelerate it if there was $185M extra on the line if they do so.

This delay is the equivalent of a Space Shuttle servicing mission. Since there will be no real servicing missions, there is no room for error and only one chance to get it right. Wfirst will happen only if JWST is successful. Continue to be patient everyone, it will be worth it!