Visceral moments of adventure cannot save a dreary film

As the credits began to roll for "First Man," my wife leaned over to me and whispered, "I am so tired of joyless movies about amazing events."

First Man, which follows the career of Neil Armstrong—played by Ryan Gosling—from his test pilot days with the X-15 through Apollo 11 is indeed as joyless as the Moon is colorless, as if the vacuum of space itself sucked out any human emotion beyond quiet suffering—of which we have an endless supply. Walking on the Moon may have been a thrilling, awe-inducing experience, but you would not know it from this film.

Hollywood movies often define character motivation through some foundational tragedy. The filmmakers latch on to Armstrong's real-life tragic loss of his young daughter to brain cancer, and repeatedly remind us of this loss throughout the movie in an effort to build to a contrived emotional resolution as Armstrong (spoiler alert) finally walks on the Moon.

Apollo presents a fundamental challenge to any filmmaker. Classic narrative benefits from clear dramatic tension and a main character with an emotional and personal arc. But Apollo, due to its immense scale, lacks both. The story is too large to tell in a regular narrative, with its story diluted between the hundreds of thousands of individuals who made it happen. The natural antagonists in this story—the Soviet Union—never acknowledged they were in a race to the Moon, and their lunar efforts were largely abandoned after the failures of the N1 rocket in the mid-1960s. The astronauts themselves were purposefully selected for their calm, focused demeanors and ability to work as a team. Consider how few movies there are about Apollo. Even Apollo 13 is an exception that proves the rule, as it focused on the mission that went wrong, and became a story of homecoming and of the human conflict with nature.

As a consequence, "First Man" attempts a character study in the context of Apollo, but never quite pulls it off. The film feels less like a story propelling forward and more like a series of events that just happen to follow one another. Ryan Gosling struggles to capture Armstrong, who, as discussed earlier, was famously reserved and lacking obvious motivation (Gosling is shown looking at the moon repeatedly throughout the film, as if to suggest some profound desire, but no more is provided).

The film is far stronger in its major set pieces: Gemini 8 and the Moon landing. Director Damien Chazelle rejects the clichéd visual repertoire of space movies, crafting an intimate and personal visual style. There are no external, downward shots of with a rocket launch shooting past you. The music has no prominent brass or heroic marches.

Shot in tight closeup with handheld cameras, Chazelle effectively places the viewer in the midst of action, as if you yourself are physically taking up space around the characters in the film. This immersive approach works best when inside spacecraft (the launch of Gemini 8, experienced entirely through the inside of the capsule, was particularly effective and was something I had never seen).

This style effectively presents the space race from a subjective, personal viewpoint, and we see little beyond the perspective experienced by Armstrong himself. It is a refreshing perspective in a genre otherwise dominated by romanticism.

The rest of the movie, which is split between Armstrong's home life with his wife Janet and two sons, and various trials in the astronaut office, is less engaging. The immersive handheld style grows tiresome, and I found myself just wanting a single, stable wide shot to establish where, exactly, we were and what, exactly, was going on.

After a riveting landing and moonwalk in which Ryan Gosling is sad, the movie ends on a quiet, sad note between Armstrong and his wife. There are no celebrations for the feat, or even a smile of accomplishment. You would not know from watching it that anyone in the space program had any fun at all.

As a space fan, I enjoyed the movie for its depictions of the experience of spaceflight itself. But as person, this is not a film I will often return to. There is a richness and complexity of human experience beyond what is depicted here, and to ignore the awe and joy of exploration in a misguided effort to create emotional drama undermines the effectiveness of this film to capture a person, not just an emotional landscape as uninviting as the Moon.

And you don't have to trust, me, just ask this happy guy: 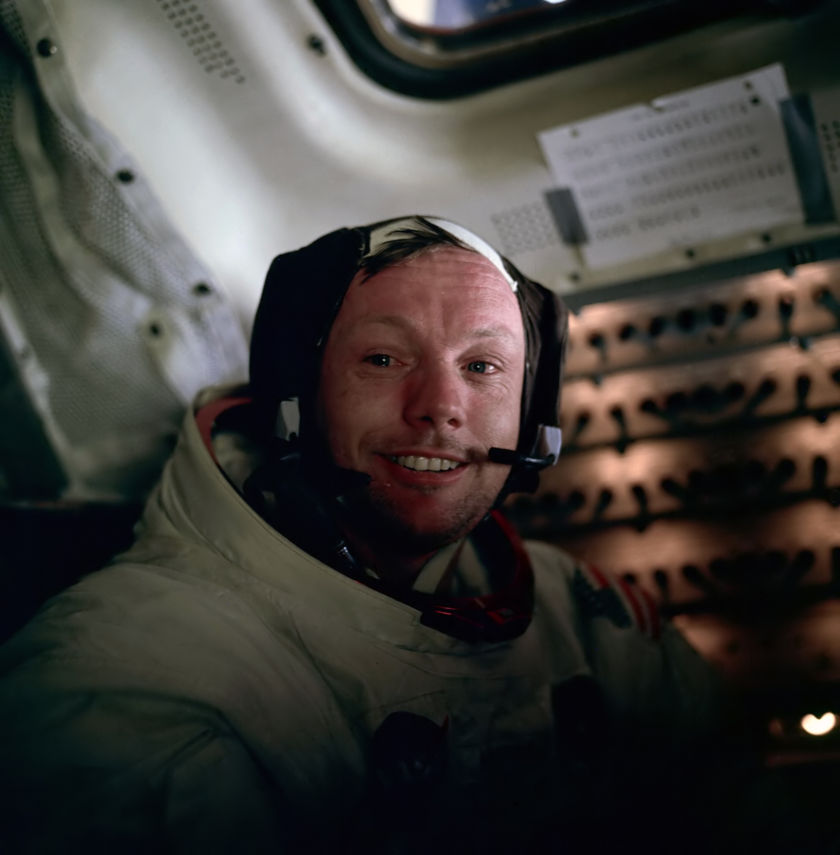 An exhausted Neil Armstrong smiles after completing the first walk on the Moon.

The key observation that helped me understand why First Man is the way it is was that it is not *supposed* to be a movie about Apollo any more than Castaway is supposed to be a movie about FedEx. The movie was trying to paint a 2-hour portrait of Armstrong, and in that sense, I think it succeeded (as expected, with Hansen doing the screenplay). Armstrong was simply not the kind of person whose life you would portray as an epic heroic struggle set to brass music. He was an engineer who liked to solve problems, and the moon landing was a difficult problem that he wanted to see solved.

Neil wasn't Pete Conrad, but there was plenty enough drama in Armstrong's life to fill a movie: bailing out over Korea, challenging missions in the X-15, Gemini VIII anomaly, deaths of good friends in the astronaut corps, bailing out of the LEM simulator, and landing with seconds to spare on the moon. It's sad if that wasn't enough for a great movie.

Not every movie has to have a happy ending, or even be a happy movie. Asking why the filmmakers focused upon the deaths and stresses and their effects upon the people involved instead of on the happy moments is to deny reality. There are plenty of escapist movies every year. Having a few that reflect upon the real world and its tragedies and disappointments is not unreasonable, nor is it a new phenomenon. Several people who knew Neil Armstrong well have come out to say that he could be funny, but that his wit was dry. They also say that he was a quiet and driven man. He didn't want to be a hero and a celebrity.

Perhaps you came to see a different movie? This was a movie *about Neil, and Jan,* and the sacrifices they made to get us -- all of us -- to the moon. It was profoundly harrowing, moving and, sometimes, raw. It was not a downer. Indeed, the movie exhilarates in many places, including all of the clear-headed, calm heroics Neil engaged as a test pilot, a Gemini astronaut, a trainee, and an Apollo commander. Joy and wonder are there, as Neil gets to view space on any of his missions, and particularly when Neil and Buzz land at Tranquility. Folks in my theatre literally gasped when Neil opened the hatch and the 70mm IMAZ viewpoint on the lunar surface was brought to us. But, in any movie about a real life, there is loss. Neil carried his loss. Jan carried Neil's loss, and her own. Those elements are not glossed over (although I wished, wished, wished, they had shown another treatment of loss, of how Buzz and Neil left an Apollo 1 patch on the lunar surface, with all the perished astronauts' names sewn into it; Buzz said Neil brushed off the lunar dust before they entered the LEM to take off). Those losses fundamentally changed these two people, as other losses changed the space program -- and it is the nature of the response to those losses that is most telling about who we are. As with all grand dreams and majestic adventures, who we are makes all the difference about where we go, and if and when we get there.

Why should it be all that joyful? From the opening at the edge of space in an X-15, to the end in quarantine, it's made crystal clear that outside of his day job, Armstrong was just a normal guy living a normal life in an unimpressive suburb. He was content with his lot. That doesn't make for compelling cinema. His day job DOES. Gemini 8 is thrilling, the other disasters and near disasters are too. That's the reason why this movie is so good. We want to relive the moonwalk, still America's greatest postwar triumph, not the love story. It ends at the right place. We don't want to see the Armstrongs divorce, or see him doing commercials, or becoming a recluse. Face it, while he EARNED his place in the rotation, his getting the position was the luck of the draw. If Grunum hadn't been late with the Apollo 8 LM, Pete Conrad would have first on the moon.

I just watched First Man and was wondering why it was so sad, why it was about a sad father losing his child, why the all-American depicted in the book The Right Stuff seemed so dry and uninspired. Thank you for letting me know my wife and I are not alone. The subject itself is so moving there’s no need to create fake drama to make it relatable. It was a realistic review.