In a surprising display of timeliness, the U.S. Senate and House of Representatives have both now released their funding bills for NASA in fiscal year 2019. The two bills are broadly consistent in their repudiation of cuts and reorganizations of major NASA programs, support for the Administration's lunar ambitions, and generous top lines for NASA's budget.

However, there are significant differences, and those differences will be the point of negotiations that will now begin between the two committees. It is very likely that there will be no votes on a final bill until November or December, after the election.

Below is a table comparing proposed funding levels of some programs and directorates between last year's final budget, the President's Budget Request, and the House and Senate bills.

All numbers are in millions of dollars. 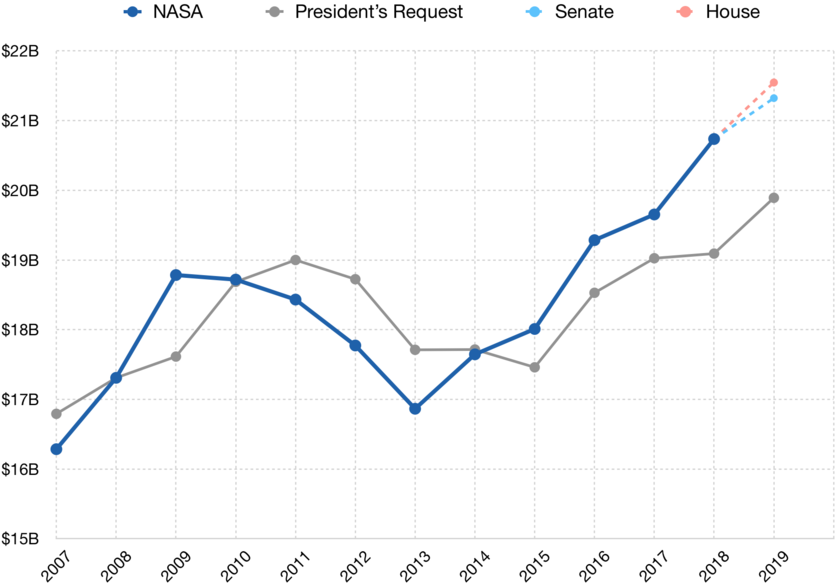 NASA's FY2019 budget situation in a snapshot. Historical funding for NASA is included as both what Congress ultimately provided contrasted with the President's Budget Request. Not adjusted for inflation.

The full Senate and House are preparing to vote on a number of appropriations bills (beyond the CJS bill, which includes NASA) this Summer. Politicking could sideline these votes, but eventually the Congress needs to approve appropriations legislation or the government will shut down. The Fall elections will slow down legislating, and there is a good chance that we will see a stopgap continuing resolution bill passed beforehand to keep the government operating until the end of the year.

In the meantime, The Planetary Society has an updated message for you to send to Congress that supports the House's proposed increase for the Planetary Science Division. We of course will be working to support our priorities, including planetary exploration, planetary defense, and the search for life, during the extended period of negotiations coming our way.

Having just finished Alan Stern and David Grinspoon's Chasing New Horizons: Inside the Epic First Mission to Pluto, I'm amazed as to how many of the best and most important missions were literally shoved down the throats of NASA or the White House by people like those who hang out here. That being said, why is the Webb going to be launched in 2020 instead of, say, last month? It's getting ridiculous. Why WFIRST was even in danger is a mystery. Is it the anti-science Trump administration, most likely, but we still have to follow that.

The JWST delays are due to a number of human-error related hardware and testing issues, some of which are catalogued here: http://spacenews.com/nasa-delays-jwst-launch-to-2020/ There will be an independent report released later this month that will give us a better picture as to the health and needs of the program. 2020, at the moment, is just a "best guess". As to WFIRST, the Administration was surprisingly open that it wanted to use money from Astrophysics to pay for lunar exploration program needs. The Administration is working under the assumption of a much more restricted NASA budget than Congress is, and it fell by the wayside. As I stated in this article, Congress seems ready to fully reject the cancellation of WFIRST, so hopefully this is the last we'll see of that.