The Curiosity rover is an ongoing triumph of science, ingenuity, and exploration

In the five Earth years since NASA's Mars Science Laboratory Curiosity made its dramatic sky-crane landing, we have had three congressional elections and a presidential election. The Earth made five revolutions around the Sun while Mars is a little more than halfway through its third. Three more spacecraft have joined Curiosity at Mars, plus one that landed too hard.

What was originally a mid-range "smart lander" grew in scope to become a "science laboratory" in the 2000s. The price tag grew with the increased capabilities and a variety of technical challenges that caused the mission to miss its original launch date in 2009. Soon after, the Mars Exploration Program (which managed Curiosity) lost nearly half of its funding, and away went immediate follow-on missions besides MAVEN, an orbiter already in development that would launch in 2014. 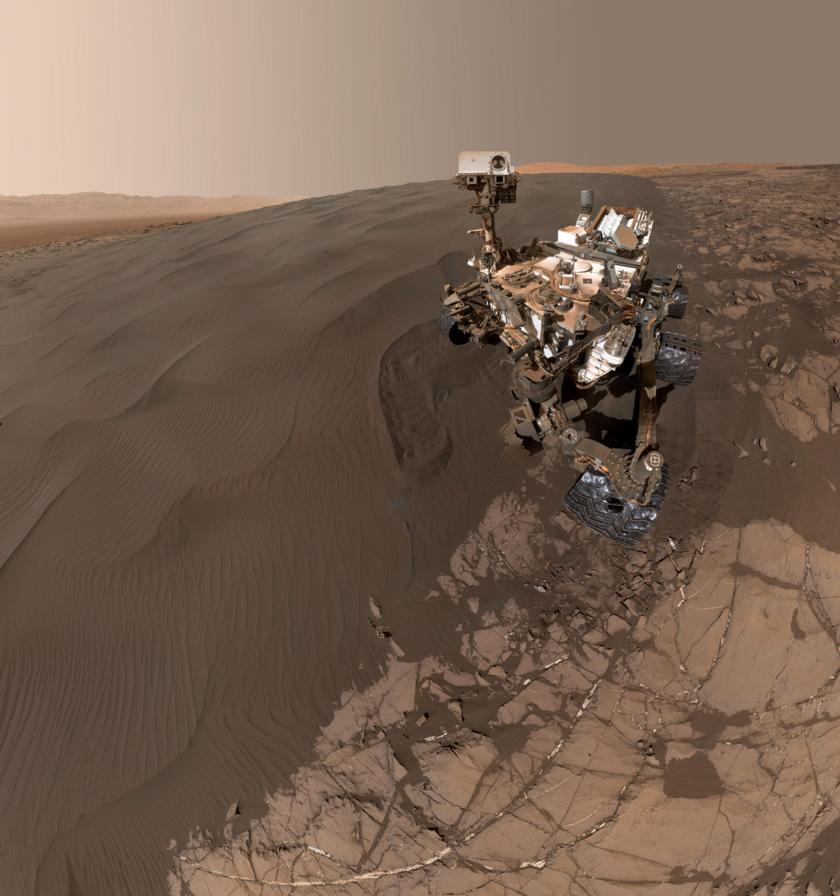 Curiosity took the 57 MAHLI photos used to assemble this self-portrait on sol 1228 (January 19, 2016). The rover was at "Namib Dune," where the rover's activities had already included scuffing into the dune with a wheel, scooping samples of sand for laboratory analysis, and dumping sieved sampled sand on the ground.

So when Curiosity landed on August 5th, 2012, the hopes of NASA's entire robotic Mars program were along for the ride. A catastrophe for the expensive, delayed mission may have been the end of the robotic Mars program as we knew it, or at least the cause for a major reshuffling and a step back from the biggest goals of Mars Sample Return.

But, as we know, the landing was a triumph. 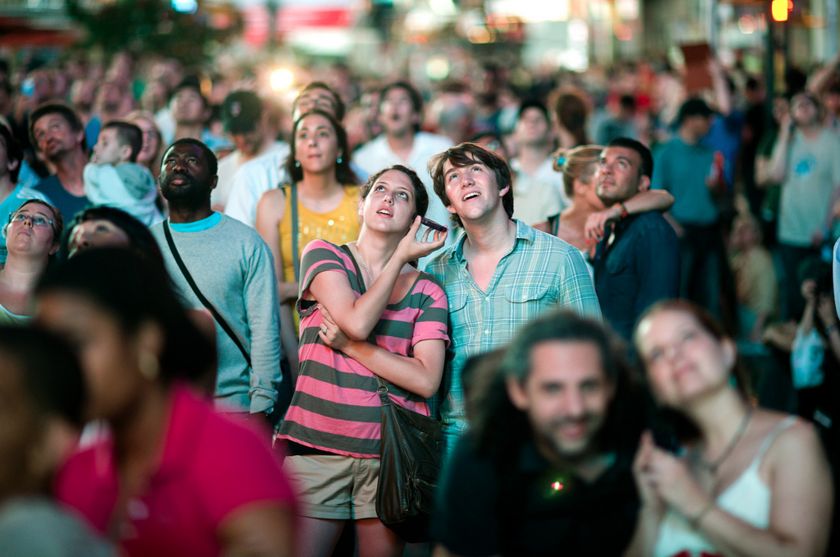 It made headlines, TV spots, and late-night talk shows. Thousands of people watched from our Planetfest event in Pasadena, CA. Hundreds of people spontaneously gathered in Times Square in the very early morning to watch the landing. And hundreds of millions more around the world shared the experience.

Curiosity brought with it the most advanced scientific instruments ever to function on Mars. For the first time in history, x-ray diffraction and laser-induced breakdown spectroscopy experiments were performed on another planet. The rover has ingested fifteen spoonfuls of martian soil and rock and analyzed its contents. It has measured the radiation environment in advance of human astronauts. It studiously recorded the weather. The rover has forged nearly eleven miles on the surface, often over unexpectedly vicious terrain, subjecting its wheels to what appears to be exotic forms of torture.

Curiosity has delivered on its primary science goals, with possibly the most important discovery being the confirmation of ancient, long-lived lakes with water good enough to drink. Some of the most exciting discoveries may be yet to come, as the rover has finally begun to climb the 5-kilometer mountain that has dominated its horizon since day one: Mt. Sharp. There Curiosity can work its way up the stratigraphic rock record, looking at billions of years of preserved history of Mars.

And even though Curiosity's immense success did not help the Mars program's budget, or even the budget of NASA's Planetary Science Division, it did help the cause of its follow-on mission, the as-yet unnamed Mars 2020 rover. The new rover will take the first step in a multi-mission effort to return samples from Mars to the Earth. Notably, it will utilize the Curiosity chassis and other major flight elements, including the breathtaking but now demonstrably successful sky crane landing system. 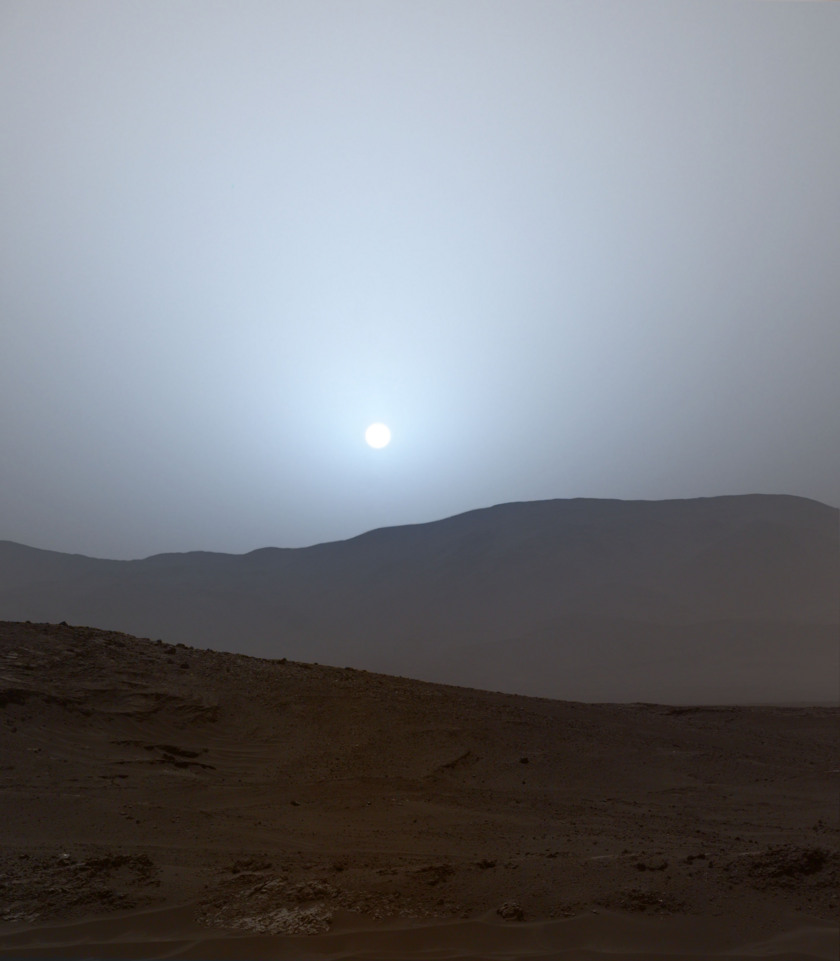 This composite image is constructed from a 6-frame Mastcam M-100 mosaic of the foreground taken in the late afternoon of Sol 956 and Mastcam M-34 and M-100 frames taken at sunset on the same sol.

The plutonium-238 power source in Curiosity will continue to power the rover for years to come, though the rover is showing signs of age. Its wheels are shredded and remain closely monitored. Its drill has been wonky and out of service while JPL engineers work on a fix.

But the near-daily routine of planning the rover's future exploration on Mars goes on. As the crowds and journalists have moved on to other, newer missions, the multinational team of scientists, engineers, and operations experts continue to plot the course of this mission of discovery. Behind the pictures, scientific discoveries, and reams of data are the hard work of tens of thousands of planning meetings, safety reviews, heated scientific arguments, and engineering analyses. The hard and generally thankless work of Curiosity's operations team is the reason for this mission's continued success.

Five (Earth) years ago today, the Mars Science Laboratory Curiosity landed on Mars. Not long after, I wrote that Curiosity was, in fact, "cheap," mainly in response to fact that every news article about the mission seemed to highlight its price tag. That analysis was true in the pure monetary sense. But when you look at the science return, or the new generation of scientists and engineers who began their careers on this mission, or even recalling that one brief moment during the "7 minutes of terror" where the world seemed to unite in a spirit of Curiosity, one begins to understand that this mission is not just cheap—it's priceless. 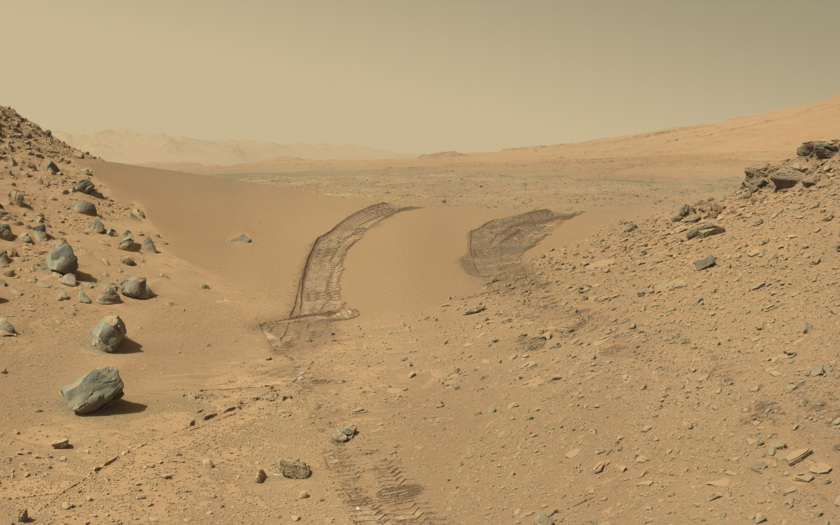 The Curiosity rover left wheel tracks across the dune at Dingo Gap on sol 538.