Lockheed Proposes to have Humans Orbiting Mars by 2028

About a year ago, The Planetary Society hosted a workshop exploring the political, financial, scientific, and public outreach opportunities provided by orbit-first approach to sending humans to Mars. Our resulting report featured a JPL-led concept that would get humans to Mars orbit by 2033, maximize the use of existing hardware, and provide a pathway for coalition-building between industry, government, and the scientific community. An independent cost estimate by the Aerospace Corporation indicated the the plan could fit within the existing human spaceflight budget as long as it grew with inflation.

Roughly a year later, Lockheed Martin revealed their take of the orbit-first concept with Mars Base Camp, an orbiting laboratory around Mars that could host six humans in Mars orbit as soon as 2028. It utilizes the SLS for launches, solar electric propulsion to pre-position cargo at Mars, and two Orion spacecraft for human sorties to the moons of Mars, as well as providing a means for astronauts to control rovers on the surface. 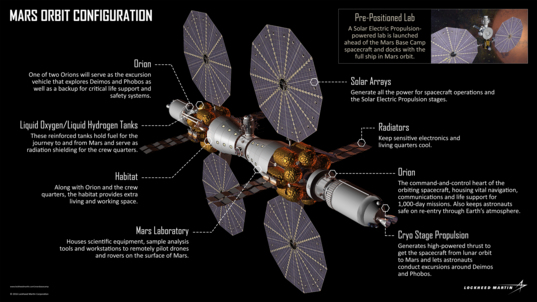 As described by Lockheed-Martin: "The major components of the architecture will be launched separately. Some are pre-positioned in Mars orbit ahead of time. Others are assembled in cis-lunar space for the journey to Mars. Six astronauts will launch on Orion, which serves as the heart of the Mars Base Camp interplanetary ship."

We at the Society are quite pleased to see this Lockheed concept embracing many of the same principles we recommended in our report: using existing programs, embracing the science potential of Mars orbit, utilizing deep space habitats in cis-lunar space as a proving ground, and the human exploration of Phobos and Deimos, to name a few.

NASA has not endorsed this concept, and many more details need to be made clear—including the results of an independent cost estimate—in order to make any sort of analysis regarding the overall feasibility of this concept. But it’s a good example of how the orbit-first approach is triggering significant thought and represents another step toward building a strong coalition needed to sustain a long-duration program of sending humans to Mars. I’m glad to see Lockheed putting ideas out there, and hopeful that NASA will be further encouraged to clarify their plans.

Looks impressive. There is a bit more info at: http://www.lockheedmartin.com/us/ssc/mars-orion.html complete with an embedded youtube video with some loud inspirational music. That said, for the most part there is more blurb than substance on that webpage. Where is the report with the details? After some digging around I did come across this: http://www.opsjournal.org/assets/SecureDocumentLibrary/DocumentLibraryManager/documents/SOC_v11-2_Price-etal_old.pdf http://www.csc.caltech.edu/stuff/VoyagerFinalReport.pdf Both pdfs deal with a “Design Proposal for Asaph-1: A Human Mission to Phobos”. The abstract for the first reads, in part: “The Asaph-1 mission was designed as part of the 2013 Caltech Space Challenge, a program that selected graduate and undergraduate students from 11 different countries to develop plans for a viable crewed mission to one of the two Martian moons, Phobos or Deimos. The program …was chosen as the favored mission proposal by senior members of NASA, JPL, SpaceX, Lockheed Martin, and the California Institute of Technology. “ The question I have is is the current “Mars Base Camp” proposal from Lockheed in reality Asaph-1 Mark 2?

What is particularly interesting for me is that, along with Space X's proposals, we now have two credible projects that will get humans to Mars basically using current generation technology. Therefore, the question is not will we ever get to Mars but when will we get there. It looks as if Erik Wernquist's visionary future for the exploration of the Solar System as set out in his short film Wanderers is on the point of starting. Safe link: http://www.erikwernquist.com/wanderers/

Thanks for the links, Stephen

SpaceX will be to Mars with Humans well before LM....LM has a great team...but the BIG government Controlled Aerospace Machine takes a long long time to churn and it's very costly. X LM however will be to Mars well before NASA (aka nasaCAR)...cause they've only been able to go in circles for the last 45 years....and some will say they've been underfunded....well why would you fund an organization that wastes billions upon billions going nowhere with only science experiments on the ISS (Albatross)? And what was Columbia's Mission....2 weeks of science experiments... and did nasaCAR know of the foam issue before the flight....of course they did. nasaCAR = a big wasteful gov. run science experiment....case in point....nasaCAR spent (wasted)....how many Billionz of Taxpayer $$$$z on the J2-X program....and then put it on the "shelf"....and how many Billions wasted on the Space Scuttle and how many lives lost on that POS??

@DeaconTAZ: “the BIG government Controlled Aerospace Machine takes a long long time to churn and it's very costly.” First of all, doing space flight, especially human spaceflight, is NOT cheap. Doing it ON the cheap, however, seems more a way of ensuring there will be lots of fiery crashes (and maybe a few deaths). To paraphrase Tolkien, shortcuts lead to long delays. Putting humans on Mars will cost billions of dollars, especially if your aim is not to do some one-off stunt but to keep humans going to Mars over the longer term. At the moment the ONLY ones who have sent anything on or around Mars are governments and governmental institutions like NASA, the ESA, etc. Thus far private enterprise, including SpaceX, has yet to leave Earth orbit. That may well change, but it will not come cheap. FYI even Christopher Columbus needed the help (and money) of a government for his own voyages of exploration. In fact, the historical reality is that most voyages of exploration have been funded by governments. @DeaconTAZ: “why would you fund an organization that wastes billions upon billions going nowhere with only science experiments on the ISS (Albatross)?” So doing science experiments aboard a space station in Earth orbit is a waste of money? Perhaps you would care to list the accomplishments of SpaceX in the field of space exploration. Sneering at the efforts of others in some particular field of human endeavour when one’s own chosen hero has thus far accomplished so little in that same field seems like an exercise in boorish naivete.

"Sneering at the efforts of others in some particular field of human endeavour when one’s own chosen hero has thus far accomplished so little in that same field seems like an exercise in boorish naivete." Seems like? The NewSpace movement is a startling example of absolute boorish naivete and gullibility. The worst thing that has ever happened to space exploration. The SLS is the single greatest threat to SpaceX and their LEO business plan. It is also the only hope for Human Space Flight Beyond Earth Orbit.

warning: hopeful enthusiast, now worn down cynic. This is more vaporware. NASA will only man rate a design at glacial speed and against their will. It's better to spend your budget without actually flying anything, so nothing bad happens. True on industry, too. Look at all the published artwork on new supersonic aircraft, blended wings, etc. What do new aircraft actually look like? Very sleek 707's. (Yeah, I know-Carbon fiber! Glass cockpits! Blah,blah) NASA says crew on ISS will enter BEAM 'couple of times a year." So bold. If I was there, I'd take off all my clothes and go spend the evening.