I’m excited to announce the release of Humans Orbiting Mars: A Critical Step Toward the Red Planet, a report based on a workshop held by The Planetary Society earlier this year. 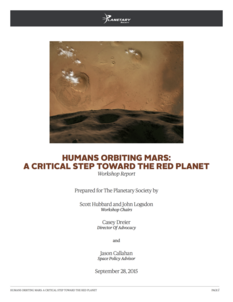 Humans Orbiting Mars: A Critical Step Toward the Red Planet

To promote this report we’ve created a new website, hom.planetary.org, which lets you download the (very readable!) document, provides answers to your frequently asked questions, and guides you to further reading. Along with the feedback we’ve received from our members (from articles published in The Planetary Report) this report will serve as a cornerstone for our efforts to positively impact the future of NASA’s human spaceflight program.

Our timing couldn’t be better. I’m not sure if you’ve noticed, but Mars is kind of a big deal right now. Just yesterday, NASA announced confirmation of transient liquid water on the surface. We have the release of the (I’m hoping) mega-hit movie, The Martian later this week. In October, NASA will convene its first landing site selection workshop focused on human exploration.

At the same time, we still don’t know how, exactly, NASA plans to get humans to Mars by the 2030s. Our workshop spelled out reasons why NASA should articulate a its plan to do so. We also examined one potential solution—sending humans to orbit first—that can play a critical role in an affordable and sustainable program of human exploration of the Red Planet.

I’m proud of the work we did in putting together this workshop and report. It’s the result of a lot of hours of hard work by our workshop co-chairs Scott Hubbard and John Logsdon, and even more hours by my colleague Jason Callahan. Ron Miller and Dr. Dan Durda graciously contributed their artwork to this report as well.

The workshop and this report are the result of tens of thousands of individuals from around the world who support The Planetary Society and enable its mission. This would not have happened without their generosity. This continues to demonstrate that people are, in fact, willing to support space exploration—and now, space policy—in a meaningful way.

So please enjoy Humans Orbiting Mars: A Critical Step Toward the Red Planet.

I don't think such a long path to Mars will work (Moon orbit - Mars orbit - Mars surface). The same president that starts the program must finish it. If not, it will follow the same destiny than the Constellation program. If NASA follows this path, the only hope I have to see mans in Mars in my lifetime is that China go first.

There are parts I like and parts I dislike. Send a preliminary Mars mission to orbit the red planet and its moons is a good idea, and perhaps (as part of the Proving Ground phase) a modest-size Lunar Deep Space Habitat that could be the predecessor to a Mars Transit vehicle. However, it seems very excessive to expect a dozen launches just for a single mission; if each SLS rocket costs a billion dollars that will already raise red flags; there has to be some way to streamline the effort - like a compromise between this "Battlestar Galactica" scheme and Mars Direct.