Due to public demand, I've created a version of our response map to account for population size of each state. The following chart displays the number of respondents per 100,000 residents for each state. You'll see that, over the weekend, Alaska now has the highest per-capita number of space advocates in the country, knocking Oregon off the top spot.

Planetary scientist Andy Rivkin also used some of our data to plot the response rate vs. household income and found this rough correlation (which generally matches the relationship for NASA support overall): 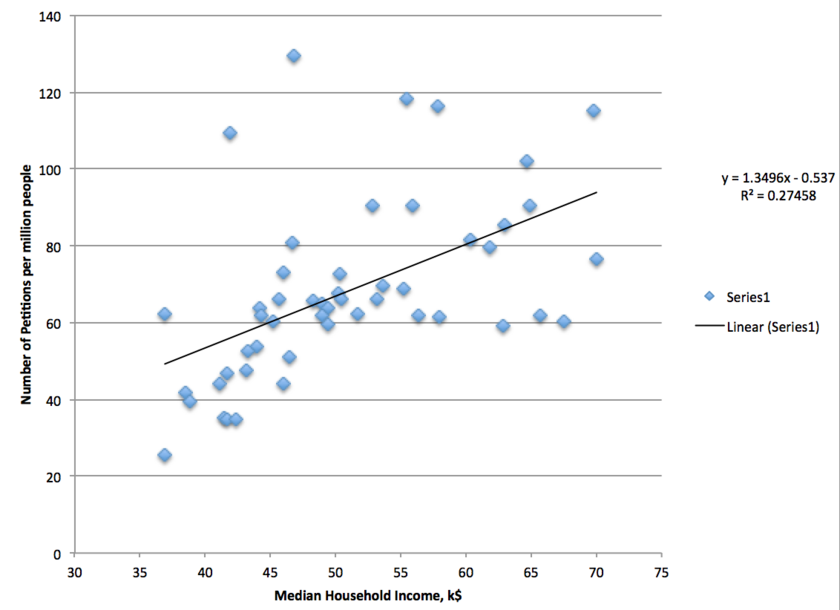 We've also had a few thousand more people sign the petition over the weekend. We're now at 24,397 respondents sending 97,588 messages to Congress and the White House.

Early Friday morning, our current online petition in support of planetary exploration became the most successful single online petition we've had here at The Planetary Society. 21,636 respondents have written their members of Congress and the White House (each one sending one email to their representative, two to their Senators, and one to the White House for a total of 86,544 messages). Additionally, we've had 1,503 paper petitions signed by our members, and another 3,191 online respondents from supporters around the world.

Not bad for a division of NASA that garners less than 9% of the space agency's budget.

To celebrate our most popular petition ever, I mapped out where these responses are coming from in the U.S. It's interactive, so hover over your state to see how you're doing compared to others (I'm looking at you, Wyoming).

Below is a chart which displays the total number of responses over the past three years. Since the first cuts were first announced to NASA's Planetary Science Division in early 2012, 75,469 people and counting have written their representatives in support of planetary exploration.

Our reporting tools, unfortunately, don't do well in creating breakdowns of our international supporters, but I'll keep updating the total number as they keep coming in.

Overall, I'm happy with these numbers, as well as their general direction over the years (up). We have lots of room to grow, though, and we'll keep working to find new ways to engage people to advocate for their passions in space exploration.

Wyoming might have only sent 36 letters, but considering their small population they sent 64.3 letters per million. The five lowest states were Mississippi at 25.6, Alabama at 35.4, Louisiana at 36, South Carolina at 36.5, and Arkansas at 40.3 The five highest states were Oregon at 135.5, Colorado at 127, Washington (my home state and I sent one!) at 122.5, Alaska at 118.3, and New Mexico at 109.0 Clearly the West coast prefers space exploration over the South when considering population.

Thank you Jonathon for the population breakdown. I was wondering about it as I was reading the article.

P.S. Proud of my state, Oregon!

Go Nebraska! We always look better (though still not great) per-capita. Does that graph plot state median household income vs. state response rates? Not to nitpick, but I'm not sure that tells you anything without knowing more about who in each state responded. All that plot probably says is that the Society has more members in states with more space industry or academia, which tend to be higher-income states. Just sayin'.