You asked us anything, we answered most of them

The space policy and advocacy team here at The Planetary Society recently held an AMA ('Ask Me Anything,' or, more accurately, an 'Ask Us Anything') on reddit about NASA's budget and space policy.

We took questions live from Washington, D.C. with me, Bill Adkins (the Society's legislative consultant/lobbyist), and Jason Callahan (Space Policy Adviser to the Society). It was a lot of fun, and we took a lot of good questions. We even had Emily Lakdawalla and Jason Davis jump in.

I've highlighted a few of my favorites below, but you can go to reddit.com/r/space to read the full thing. 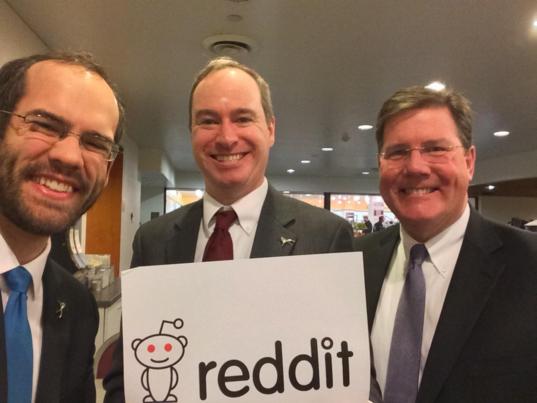 Recently read on Vox http://www.vox.com/2015/2/23/8052365/nasa-budget-europa?curator=MediaREDEF that the US will have a deficit of probes studying Jupiter and beyond in the coming years because we haven't launched any probe in the recent past. This seems like a major problem! Is there any way that we could stop this from happening or is that gap inevitable?

This is a major issue, and one of those reminders that space exploration doesn't just happen. It takes serious focus and will to maintain the gains we have made over the decades.

The U.S. has been an active presence in giant planets since Pioneer 10. We've had a great run, with Pioneer 11, Voyagers 1 & 2, Galileo, Cassini, Juno, New Horizons, and....? One by one those spacecraft have either left the realm of the giant planets or ran out of fuel. New Horizons will be far past Pluto's orbit in a few years, and Juno and Cassini end their missions in 2017. Starting that year, and for the first time since the early 1970s, the U.S. will not have a presence there.

But the President's new budget request for NASA in 2016 contains a critical commitment to begin a mission to explore Europa. This turns a collapse of outer planetary exploration into a mere gap, but even under the most optimistic funding scenarios, a Europa mission wouldn't arrive at Jupiter until March of 2025.

That means, at minimum, there will be an 8 year gap.

This is why it's so crucial to maintain a steady frequency of new missions. NASA needs to have the resources to be flying one mission, finishing another, and planning yet another, all at once, in order to keep a steady presence. They've done this very successfully with Mars, but not so much with the outer planets.

Could you compare planetary science funding for NASA in relation to ESA Roscosmos, JAXA ISRO and are there missions most ideal for collaboration in today's situation?

Generally, it's much larger than all of those space agencies, and you can tell just by the number of missions that NASA engages in compared to that of ESA/JAXA/ISRO/etc.

But it's even difficult to compare funding year-to-year within NASA. This is basically due to changes in internal accounting practices. For example, in 2014, NASA started paying for the Department of Energy's Plutonium-238/RTG infrastructure to the tune of about $50 million per year. In 2013, Planetary got $1.28 billion. In 2014, Planetary ended up with $1.35 billion. That looks like an increase of $70 million. But $50 million of that extra money isn't paying for missions, it's paying for infrastructure previously supported by the DOE. So the real difference in $20 million. Multiply that change by 20, and you begin to see the problem of comparing budgets.

Our Planetary Science Funding Chart attempts to do this over the past 10 years. We detail major differences, but even then, we ignore many of the smaller ones because they're very hard to track. Since we only have access to public data, we don't know exactly how much money every program gets year to year, and NASA will often change how much detail it provides in its public budget.

A good example of this is the Orion crew capsule. NASA's public budget request for 2016 call for 1.0858 billion dollars for Orion. This number is followed by eight pages of explanatory language about the project, including contractors and potential risks. But there is no further breakdown of that number that I know about.

The same budget requests $1.361 billion for planetary science, followed by fifty-three pages of explanatory language, and breakdowns of spending on every major project, down to the costs of running individuals missions, scientific research grants (most of them), and management costs.

And even if you get all the data, NASA often changes how they bookkeep a lot of funding in their accounts. This makes it hard to know exactly where funding goes over the years. This is not a coincidence (I should note that this happens for every federal agency, ever—this is not just NASA).

My colleague Jason Callahan has actually made a heroic effort to track planetary science funding (and other science funding) in NASA over its 50-year history in a consistent way. You can check out his series of posts about the rise and fall (and rise and fall) of planetary funding, called the Competition for Dollars.

How many financial categories are there for exploration missions? I know there are big Flagship missions (IIRC like Cassini and Curiosity), and then lower-cost missions (was GRAIL one of these?). I thought there was a middle category as well, but don't remember any example missions.

What are the boundaries between these categories, and do those get adjusted for inflation/experience/etc? What goes into those costs? Are launch vehicles covered?

This is a very important point. Thanks for raising this question.

The mission categories vary by science division, but I will use Planetary Science for my answer, though there are parallels in Astrophysics, Earth Science, and Heliophysics.

Flagships cost over $1 billion and are mean to address key strategic science goals defined by the planetary science community through the Decadal Survey. The Decadal Survey is a report put out by the National Academy of Sciences (you guessed it) every 10 years. It acts as a consensus recommendations of the science community for the most important questions and missions NASA should pursue in the coming decade. Right now, the flagship missions are Mars 2020 rover and a new mission to Europa. These are the #1 and #2 recommendations in the Decadal survey. Each flagship mission is proposed by NASA and approved by Congress.

New Frontiers are missions capped at $1 billion (which does not include the rocket to launch them) and are competed from a list compiled in the Decadal Survey. Competed means pretty much exactly what it sounds. Scientists and engineers will band together in groups and propose mission concepts that are then reviewed by independent panels. The proposal that gets the highest rankings in technical feasibility and science return "wins" the competition and that team that proposed it gets the money to build the spacecraft (I'm simplifying here). To win a billion dollars, you need to make a pretty convincing argument, and usually these teams invest hundreds of thousands (if not millions) of dollars and thousands of human-hours to develop their proposals. The one rub for New Frontiers is that any proposal must match one of the missions types defined in the Decadal Survey. For a whole lot more on New Frontiers and why its important, my colleague Jason Callahan has a great article in this week's The Space Review about this very topic.

New Horizons, which will fly by Pluto in July, was the first New Frontiers mission (I know, the naming here makes it very confusing). The latest NF mission is OSIRIS-REx, which will return a sample of the asteroid Bennu to Earth in 2022. NASA tries to select a new NF mission every 5 or so years.

Discovery missions are capped at $450 million (not including their launch vehicle) and are competed in a similar way as New Frontiers but with one crucial difference: pretty much anything goes. As long as your team's proposal addresses some of the important science questions defined by NASA, you can suggest a mission to anywhere besides the Earth. The Decadal Survey recommends a new Discovery mission every 2 years, but right now we're at a new mission at every 6 years (budget cuts). NASA is planning to reduce this to one every three years starting in 2020. The next Discovery mission is InSight, which is a geophysical lander on Mars. The next Discovery mission will be selected next year from a pool of 28 proposals. These were actually submitted just last week, so if you see any planetary scientists with big bags under their eyes and more grey hair than they had a month ago, you can probably congratulate them on their submission. And yes, GRAIL was a Discovery mission.

A really important feature of the New Frontiers and Discovery mission lines is that Congress does not need to approve each one. They approved the funding line, but NASA can move forward on new missions even in a deadlocked Congress (as long as overall funding is there). That's pretty great, and avoids one of the greatest pitfalls of flagship missions: getting through a sometimes-skeptical political system. They also are meant to launch often, so NASA doesn't end up ornamenting these things like christmas trees with every instrument they can think of (which you tend to do if you have a once-in a lifetime chance to explore, say, Venus). This frequent launch rate also keeps the industry that creates spacecraft humming along and engaged, building and maintaining experienced people and systems.

I believe NASA can decide to increase the caps as needed, and the Decadal Survey recommended the caps to go up slightly this decade.

How does asteroid mining fit into this picture? Is this even something feasible to contemplate doing within the century?

How does NASA figure out what its long term strategy is, given that technological change can occur on the time scale of a typical multi-year long mission? How does it manage this uncertainty?

At the moment, asteroid mining is in the early conceptual stages, and a few private companies are developing business models. The real question is whether asteroids contain anything valuable enough to offset the cost of getting to them. I think the real value - far in the future - will be water on asteroids that could be converted into fuel for future exploration.

NASA's long-term strategy is determined through a long, arduous process involving engineers and scientists at the agency and in the science and technical communities, government and industry stakeholders, and budget projections that are often affected by outside circumstances. Technology is just one of many factors. That said, NASA's Space Technology Mission Directorate both develops and evaluates new technologies from the conceptual stage to flight readiness.

One myth about NASA is that it always uses the most cutting edge technology. In fact, if you're flying a really expensive mission to a place where nobody will be able to fix the things that go wrong (or there are no spare parts), what you want is the most dependable, tried-and-true technology you can find, with as much redundancy as possible. Of course, there aren't many people doing the things NASA does, so NASA generally has to develop and test those technologies.

Again, you can read the whole thing on reddit. A big thanks to the moderators on /r/space for their support in setting this up.