Why We Write to Congress

(P.S. It's Time to Write to Congress)

When asking people to write Congress about planetary exploration, I am invariably confronted with a certain, shall we say, reticence about its value.

"Congress hates science, why bother?" or "These bunch of [clowns]* can’t get anything done, what’s the point."

Given the political brinksmanship and general gridlock these days, this is not an unreasonable thought. It is, however, wrong.

Individual congressional offices tend to be responsive to the needs and desires of their constituents. That doesn’t mean that they will go to the mat for every voter’s desire, but it does mean that they listen and have a system for processing and recording feedback. They really do. I’ve heard this from a variety of congressional staff on both sides of the aisle.

The Congressional Management Foundation has done research [pdf] on this which backs this up. They even surveyed professional staff about which forms of communications from constituents makes the biggest impact. You’ll see that it generally correlates with the amount of time a constituent has to invest: 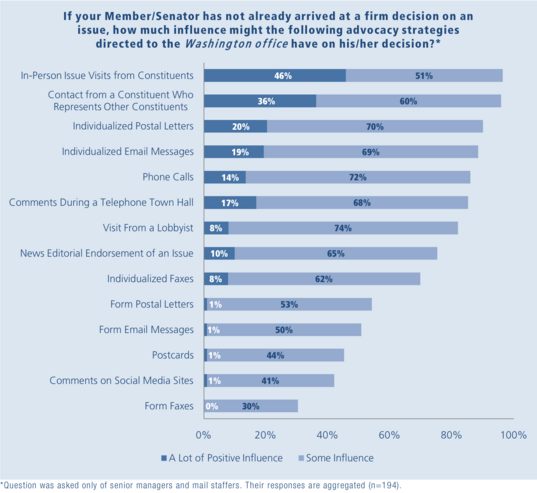 Note the difference between “Form Email Messages” and “Individualized Email Messages.” This is why we provide the option to customize your message on our own email Congress form.

So this is why we ask you to write. It works! Even given the larger political gridlock in Congress: if you don’t raise an issue with your elected officials, they won’t know you care.