Wow, an Increase of $170 million for Planetary Exploration

The House comes through yet again

As I reported last week, Congress is in the midst of budget season, with the House Commerce-Justice-Science (CJS) subcommittee pulling out the stops in their funding bill to increase NASA's budget in 2015. Tomorrow, this bill goes before the full House Appropriations committee and we've finally learned some more details about how the committee wants NASA to prioritize its budget, and the news is very good for planetary exploration. 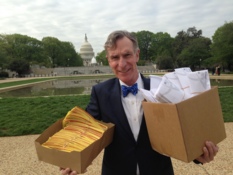 The House would provide NASA with $1.45 billion for Planetary Science, which is $170 million above the White House request and an increase of $105 million over last year. This gets us to within spitting distance of The Planetary Society's recommended minimum of $1.5 billion per year for a healthy program, so we are quite pleased with this number!

And since NASA's Science directorate as a whole saw an increase, no other science division was raided to pay for this. Astrophysics saw an increase of 10% above the White House request, which includes funding to continue operating the SOFIA infrared telescope (though at a reduced level of $70 million) which had been cut completely. Earth Science saw a minor cut of $20 million to $1.75 billion. Heliophysics is funded at the level requested for 2015.

You can read all of the details yourself in the CJS committee report [pdf] (it starts on page 67).

Committee reports share the consensus congressional opinion on how to appropriate money internally within federal agencies, and though they are not enshrined in law like the actual funding bills themselves, agencies tend to hew pretty closely to these recommendations. Modifying these numbers too much raises a considerable amount of ire from Congress. NASA attempted this in 2013 and received a reprimand earlier this year.

But let's look at the Planetary Science Division funding a little more, since there are some choice nuggets within the report. Here's a quick breakdown comparing the FY2015 President's budget request numbers and the House CJS committee's recommendations (all numbers in millions):

Basically, everything went up!

The report contains a lot of additional language about further breakdowns of these numbers, including provisions specifying minimum funding for the Mars 2020 sample-caching rover, starting a new Discovery (small-class) mission competition in 2016, and, of course, providing $100 million for a major scientific mission to Europa. The report goes so far as to dismiss the possibility of a sub-$1 billion mission (for which NASA had requested ideas last month) saying that "the committee has not seen any credible evidence that such a cost-cap is reasonable."

The report also contains this nice summary of the problem we've faced for the past three years with planetary science, which I'm quite fond of:

"NASA's request for Planetary Science once again represents a substantial decrease below appropriated levels and would have a negative impact on both planned and existing missions. The recommended funding levels attempt to rectify this problem by supporting both the formulation and development of new Planetary Science missions and the extension of all healthy operating missions that continue to generate good scientific output."

This bodes well for continued operations of the Opportunity rover and Lunar Reconnaissance Orbiter, in my book.

Now, keep in mind that this just represents the first steps in the House of Representatives. The House bill needs to get through the full committee, where it faces amendments modifying the bill, and also needs to pass through the full House, where it could face even more amendments. The Senate needs to complete their own NASA funding bill, which must endure the same series of steps as the House. Both bills need to be merged together and passed sometime in the fall. So we have a ways to go, but our initial conditions for Planetary Science are very, very good here (as is much of NASA, which I will discuss in a later post).

Our focused, year-round advocacy is working. What seemed so hopeless just a few years ago has become hopeful. Europa beckons, and we may heed that call. Mars calls to us, and we are listening. The solar system is out there, waiting to amaze us with its secrets. We may uncover them yet.

We need to stay diligent and ensure this gets passed into law. If you haven't written your representatives yet, write now!

GREAT NEWS! Thanks for the update and thanks to EVERYONE who got involved in whatever way you did! THANK YOU! As Casey asked, lets not stop fighting the fight for the missions yet. Until she flies, the fight ain't over!

Congrats to all who fought so hard for the budget! This is very exciting, and I have to say, something I wouldn't necessarily have expected from the House. I'd still like to see full funding of Earth Science, or an increase… since this really isn't the time to be scrimping on things like, oh, say… climate science. But this is a fantastic turnaround after the incredibly disappointing proposals from the White House. Onward and upward!

Awesome! I like to think that my letters to the congressman here in Utah helps. I usually get an email response back from them that amounts to a campaign speech blaming everything that's wrong with the world on other side of the aisle. Glad to see them supporting science and exploration.