Pounding the Pavement in Congress, Together

My feet were aching, toes shoved up against shoes that are too-tight, but I was keeping pace anyway. Hundreds of people flittered about us as we made our way through the labyrinthine tunnels connecting one House office building to another. Checking our assignments, we saw that our meeting would be up on the third floor. The elevators were slow, so up the stairs we went. 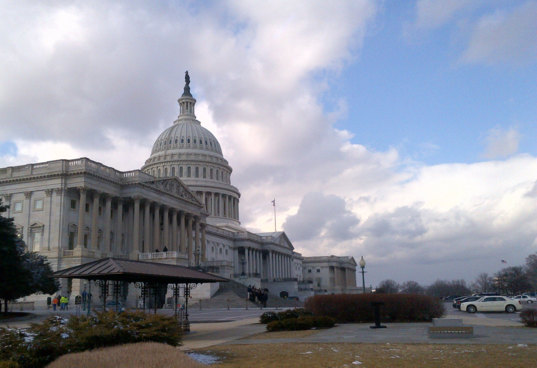 The U.S. Capitol During the Space Exploration Alliance's 2014 Legislative Blitz

We found the office after a few tries and checked our phones. We were five minutes early. We looked up the staffer's name, quickly reminded each other of the background of the congressional representative (sits on the House Science Committee, but not on the Space subcommittee) and walked in. We introduced ourselves, saying we were there on behalf of the Space Exploration Alliance. After a few minutes, the staffer was ready: we had 10 minutes to say why we were there, who we were, and why their boss should work to support NASA.

This scene was more or less repeated a dozen times over the course of two days this week as part of the Space Exploration Alliance's Legislative Blitz: an annual grassroots outreach effort to staff and legislators in Washington, D.C. Much of the management is handled by our friends at Explore Mars, but there were representatives from all of the major pro-space nonprofits. My group was comprised of four people, three Planetary Society Members and a supporter of Explore Mars.

Forty-eight people signed up this year, a strong number, though we're hoping to grow participation in 2015. We were broken down into nine teams that cumulatively went to 105 meetings. The space organizations all signed off on a joint set of talking points [PDF] that represented our consensus opinions: that the United States should lead in space, that it's crucial to the future of humanity, and that both humans and robotic missions deserved support. 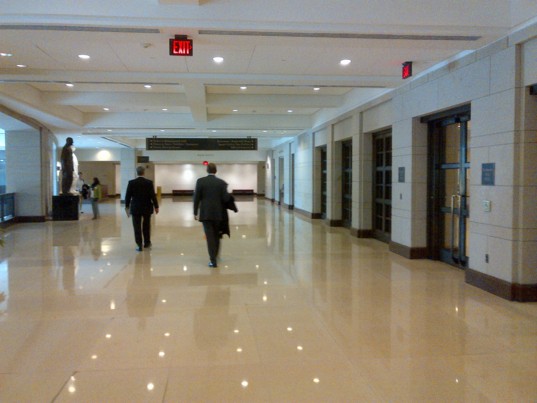 A quiet moment as we cut from the Senate offices to the House offices via the underground tunnels that connect through the Congressional visitor's center.

Most people we met with were generally supportive (few people are anti-space) but we did hear, over and over, that they need more people to call their offices in support of NASA. Everyone may like it, but unless they feel the political support, NASA will never get the funding it needs to truly explore. The blitz is an important component, but if you're not calling your Senators and Representatives (or writing the President and NASA if you're overseas) then we can only do so much.

But it was still inspiring. Nearly all of the people participating in the Blitz came to Washington, D.C. on their own dime. Though many of us had different priorities, our fundamental goals were the same: we must explore space. We found common ground and a common message, and together we were advocates for one of humanity's grandest endeavors. This is why our organizations exist: to organize. Together we are stronger and together we can make the future in space we all want to see. Sore feet are a small price to pay.

Looking at your talking points PDF, the following needs to be stated only as 1 or 2 sentence axioms or assertions: 1) Goals for Human Spaceflight, 2) Leadership in Space Science/Robotic Precursor Missions, 3) Private Sector growth, 5) International Cooperation. What is left as talking points is the course of NASA launch systems, ending dependence on Russia, and transitioning from SLS and Orion to take full advantage of the cost savings of emerging commercial launch. This is the major issue facing NASA and this includes a major impact on planetary science. The choice is between a sea change beginning after the 2016 election or something that takes place ten years later - 2026, wastes ~$50B and delays human spaceflight to Mars to the 2040s. The wasted funds and lost chance at saving funds will also lead to delays in interplanetary missions such as to Europa, Mars, Enceladus and near-Earth asteroids. Focus your goals in this way, add thousands of signatures and use a tele-presence of advocacy groups from each legislator's districts or states to backup your goals to these representatives on Capitol Hill and you might have some impact in the face of millions spent by lobbyists supporting Boeing, Lockheed, ATK and others. Your efforts are commendable and should be continued.