Plutonium-238 is Crucial for Space Exploration – and it's Running Out

A new article in Wired highlights the fact that NASA is running out of Plutonium-238 (Pu-238), which is used to provide electricity on spacecraft that can't depend on solar power:

The country's scientific stockpile has dwindled to around 36 pounds. To put that in perspective, the battery that powers NASA's Curiosity rover, which is currently studying the surface of Mars, contains roughly 10 pounds of plutonium, and what's left has already been spoken for and then some...The nuclear crisis is so bad that affected researchers know it simply as "The Problem."

But it doesn’t have to be that way. The required materials, reactors, and infrastructure are all in place to create plutonium-238 (which, unlike plutonium-239, is practically impossible to use for a nuclear bomb). In fact, the U.S. government recently approved spending about $10 million a year to reconstitute production capabilities the nation shuttered almost two decades ago. In March, the DOE even produced a tiny amount of fresh plutonium inside a nuclear reactor in Tennessee.

It's a good start, but the crisis is far from solved.

This is an important article, and you should read all of it (go ahead, I'll wait). NASA has started the process of creating new Pu-238, but it won't reach full production until 2019, and even then it will only produce a mere 1kg - 1.5kg per year, barely enough to meet future thanks to efficiency gains from the Advanced Stirling Radioisotope Generator. 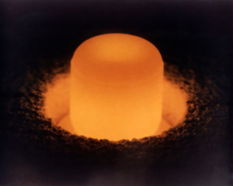 The availability of Pu-238 for space exploration is an issue the Planetary Society cares about tremendously. Without Pu-238, there would've been no mission to Pluto, no mission to Saturn, no Curiosity. It would truly devestate the future of planetary exploration if we run out. It's an issue we always talk about when we meet representatives in Congress, and we've sent multiple letters of support like this one [pdf] to congressional committees over the years.

Our members [not a member? Join! --ed] can expect further analysis of the Plutonium-238 problem in the next issue of The Planetary Report magazine, including a focus on why it's been so hard to start up again. It was a decision made by congressional staff members (not elected representatives!) responsible for the Department of Energy's (DOE's) budget in previous years.

So it's not completely fair to blame Congress on this, only some of Congress. The White House and the members of Congress responsible for NASA have been extremely supportive of the program to restart Plutonium-238 production in the United States. But several staffers on the Energy Committees thought otherwise, and they won. The White House now only requests that NASA pay the DOE; they have given up on making the DOE pay its fair share.

Do you want to ensure that NASA has access to Plutonium-238 to power its deep-space missions in the future? Make sure to sign our Advocacy petition to properly fund Planetary Science – they're the folks at NASA stuck with the bill.

This time I can't sign your Advocacy petition. One of required fields is US state/ province but I live outside US. I think you should not only fight for restarting Plutonium-238 production but also consider using other long live radioactive isotopes

@Zbigniew Chruszczewski: Well, I see that the Advocacy petition now has "Not a US Resident?" line, but what about those of us who not only not US residents but not US citizens either? BTW, I notice that the "Not a US Resident?" option goes to the US President, not Congress. If the stumbling block seems to be with congressional support (or at least staffer support) rather than presidential support, how will sending missives to the president do anything to change congressional minds if those presidential missives are filed away in some White House archive and never seen by Congress?

Stephen & Zbigniew: Our system interfaces directly with the public servers of Congress to submit messages from constituents. Those systems have changed over the years to only allow submissions from addresses matching those in their district. This has made it difficult for non-constituents, particularly international members, to write to Congress. This is why our international form directs to the President. I'm afraid that the only way to contact committee staff directly is via letters or personal emails.