Untested technology is too risky

The Europa Clipper team has rejected the use of the Advanced Stirling Radioisotope Generator (ASRG), NASA's next-generation plutonium power source, due to reliability issues within the the extreme Jovian radiation environment.

ASRGs use Plutonium-238 as a heat source to drive a stirling engine which generates electricity. ASRGs can provide the same amount of electricity as NASA's workhorse Multi-Mission Radioisotope Thermoelectric Generators (MMRTG), but using only a quarter of the plutonium.

A dwindling supply of plutonium has led NASA to invest heavily in ASRG technology over the past ten years. The promised efficiency gains would extend the utility of the existing plutonium supply and reduce the amount the Department of Energy would need to create every year, saving NASA millions of dollars.

But the ASRG program has faced constant reliability issues throughout its development. Unlike the MMRTG, which has no moving parts and can last for decades, the ASRG must maintain a smooth motion of a piston throughout the lifetime of a deep-space mission. A planned long-duration mock mission of the ASRG was canceled this summer due to budget cuts related to the sequester.

NASA claims that the first flight-ready ASRG will be flight ready by 2016, but there is no planned mission use it. Two small mission concepts that would have depended on ASRGs – the Titan Mare Explorer and Comet Hopper – were rejected last year. 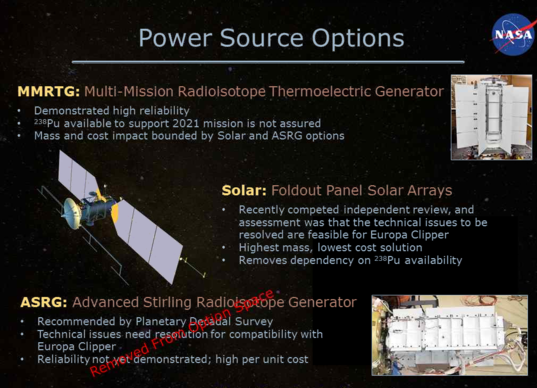 A slide from the Europa Clipper mission concept update presented by Barry Goldstein at the recent CAPS meeting on September 4th, 2013. The ASRG has been removed as an option for this mission, leaving only the Plutonium-hungry MMRTG or large solar panels as means for powering the spacecraft.

The news was announced at the National Research Council's Committee on Astrobiology and Planetary Science meeting earlier this week by Barry Goldstein, the Europa Clipper mission project manager at JPL.

According to the presented slides, the lack of any previous missions using ASRGs, as well as reliability questions of the moving piston within harsh radiation environment around Europa created an unacceptable risk engineering and cost risk for the mission.

The team behind Europa Clipper mission concept is now exploring regular MMRTGs and large solar panels to power the spacecraft.

According to Goldstein, solar panels represent the cheapest option for the mission. Preliminary analysis suggests they would have the same surface area as NASA's Juno mission to Jupiter (9m x 2m) and provide about 150W of continuous energy while exposed to the Sun – equivalent to an MMRTG power source. A battery (required for any power source configuration) would provide power when the Clipper's orbit passes into shadow. While solar panels are the heaviest of all options, they are well within the mass constraints of the mission.

Goldstein emphasizes that MMRTGs are still the current baseline for the Clipper. But since MMRTGs are expensive, would eat up most of the remaining U.S. supply of plutonium-238, and the fact that current space policy dictates the use of solar panels unless the the use of RTGs is absolutely necessary or significantly increases the chances of mission success, my bet would be on solar panels for the Clipper.

Of course, all of this is hypothetical. The Europa Clipper mission is not accepted or advocated by NASA headquarters. All current activity is funded by specific earmarks in congressional budgets which provide just enough money to continue advanced concept studies and reduce the overall technical risk of the mission.

Should a mission to Europa be accepted by the White House and NASA, an official budget request would have to be submitted in FY2015. The mission is currently estimated at around $2 billion.

Note: this post was updated slightly on 2013-09-06 to clarify that MMRTGs are still the current baseline of the mission.

So solar panels are the highest mass option, especially with mandatory battery, and may also provide less power than MMRTG, thus clearly allowing less science payload and a less capable mission - which is pretty dopey if there's any feasible alternative whatsoever. If shortage of Pu238 is the problem, are there no other parties able and prepared to come to the party for such a grand enterprise? Maybe they might have to be enticed with a slot for a non-US instrument, or some other sense of recognition for their contribution; and it might be that $ had to change hands, but surely Russia, Europe, China or Japan might see the benefit of making a contribution to such a noble and globally notable cause? Who has some 238? I'm assuming that possession by nations with less sophisticated nuclear capabilities is unlikely. But whoever contributed this component would be getting their name on a very high-prestige project, and getting very good global "PR"! If money and instrument(s) were also involved, the deal would look pretty good - assuming the US is prepared to give up a bit of the action. One hopes every last avenue is being properly explored!

Paul: I've been in contact with people on the concept study team and I've clarified some of my text to address your concerns (since others will surely share them): * solar panels will provide equivalent power to an MMRTG * while heavier, they are well within the mass limits on the mission * a battery would be used regardless of the power source (like on the Curiosity mission -- it only draws power from its battery which charged by the MMRTG). * current policy dictates that if an alternative to plutonium power is possible, the alternative should be used. The scary thing about the Pu-238 shortage is that there are no other countries that we know of currently producing Pu-238. Even though many produce nuclear weapons, creating useable Pu-238 for space missions is a complicated, costly process. From 1992 to 2009 the U.S. Department of Energy purchased Pu-238 from existing Russian stockpiles, but the Russians withdrew from that agreement unilaterally, most likely because they have intentions to use it for their own future missions. So buying Pu-238 isn't out of the question, but the problem is no one's selling. The next issue of the Planetary Report will contain a large feature story on NASA's efforts to restart Pu-238 production in the U.S. and will cover a lot of this issue in more detail. Look for that near the end of September.

Thank you Casey for those careful insights. That's pretty much what I thought about the Pu-238, but the info on the panels and battery is relatively cheering. It still seems like the Russian scientific establishment might be bribed or negotiated (with a suitable instrument deal?) if their whole purpose is to use it for impressive space missions.

Europe will never be able to work with Pu238. The political system in a few ESA member states will never enter this area. They saw the Cassini launch and were well aware that already a PU-238 heater with a few gramms of Plutonium in Rosetta made a big problem. I imagine China handing over 20kg of Pu-238 and asking for one or two key instruments and all interface details they need. The ITAR regulations will keep most engineers and project managers in prison for the rest of the mission. India will give some NASA people a real headache when they will have two instruments. So US will have to do on their own.

@stone, I agree that ESA is very unlikely to use plutonium. However, they seem to be interested in americium : http://www.world-nuclear-news.org/ON-Positive_results_from_space_battery_work-2607135.html Why americium would be more politically palatable, I'm not sure. As for NASA using all the plutonium for Mars where solar panels work very well, I find it very disconcerting and shortsighted.

I've received an additional comment from John Hamley, the Manager of the Radioisotope Power Systems Program at NASA Glenn Research center, he says: "The statement about NASA policy in the final bullet of your response to a reader comment is too limiting. Radioisotope Power Systems (RPS) are considered for use by the NASA Science Mission Directorate when RPS would enable or significantly enhance the ability of a mission to achieve its goals. The Europa Clipper study team is continuing to investigate solar and RPS options to allow NASA to make just this sort of comparison between the two." That's the key. Will an MMRTG "significantly enhance" the Clipper mission to justify its use? We'll have to wait and see.