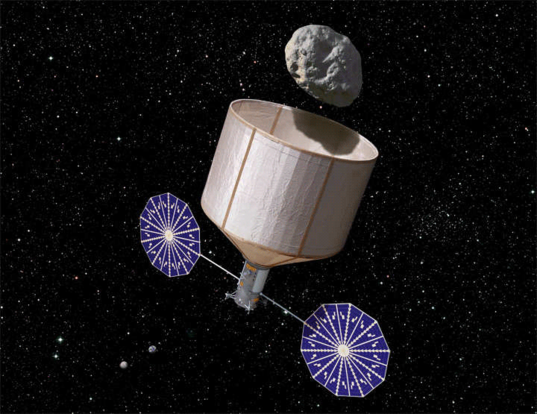 The original Asteroid Redirect Mission concept, as envisioned by the Keck Institute, uses a large capture bag to enclose a small asteroid. NASA has since opted for a claw mechanism that would pluck a small boulder off the surface of a larger asteroid.

On Monday, the newspaper The Hill published dueling op-eds from NASA Administrator Charles Bolden and House Science Chairman Lamar Smith (R-TX). The op-eds illustrate the large gap in opinion regarding NASA's proposed Asteroid Redirect Mission, with NASA and the Administration on one side, and the Republican-controlled House moving further and further away.

It is hard to imagine anything more beneficial to humankind than protecting our planet from a dangerous asteroid that could strike Earth with devastating force, something we don't currently have the ability to do. In addition to developing technologies that will aid in our planning for the first human journey to Mars, an asteroid mission will help us learn more about how to prevent an impact from one of these mysterious objects.

Yet Chairman Smith takes a completely opposite view, claiming that the mission does not directly help in protecting Earth from asteroid impacts at all:

The proposed asteroid retrieval mission would contribute very little to planetary defense efforts. The size of the target asteroid for this mission is only 7-10 meters in diameter, too small to cause any damage to Earth. Any insight gained by such a mission would have little relevance to protecting against larger "city-killer" asteroids.

Smith is basically correct here, though you'll notice that Bolden isn't quite talking about the same thing. Bolden only ever states that ARM will "help us learn more about" ways to prevent asteroid impacts. That's pretty hedge-y.

What strikes me most, though, is how much energy NASA is spending trying to argue for this program. Shouldn't that have happened behind-the-scenes before they rolled this out? What if they were pushing this hard to explore Europa? Or improve the Orion Crew module so it could last longer than 21 days in space? By engaging in this extended public debate with the House Republicans, NASA's focus is drawn away from many other issues.

We already have a mission (Osiris-Rex) that is going to return samples from an asteroid, for less then 1 billion dollars. Why would we spend tens of billions of dollars more to build a spacecraft to grab and bring back a smaller, less interesting asteroid, so humans can fly out and pick up more.

I don't understand this administration. First, they keep trying to sabotage to one area of NASA that is continually inspiring the public, i.e. planetary science. Now they propose an uninspiring, distraction of a mission to retrieve an asteroid. I am starting to believe that Obama is trying to make his campaign pledge to cut NASA's budget and give it to education programs, by showing NASA as being impotent and incompetent.

By this point, it is very clear that House Republicans will oppose the Obama Administration no matter what it proposes, the actual merits of the case being irrelevant. Of course, NASA just has to suffer this obstructionism in silence, but those of us in the private sector do not have to be so constrained. As far as ARM (or ARRM) is concerned, I personally feel in alignment with what Gentry Lee of JPL said at the Target NEO 2 workshop last week at the NAS (in my paraphrase) : for decades manned space flight has been going nowhere (in the sense of deep space capabilities), you have to start somewhere, and this is a reasonable and doable start.

This mission proposal begins with an unmanned capture of an asteroid. Let’s add on the relevant instruments, include a core drill and a return capsule and eliminate the manned part of this mission entirely. If we must develop a manned deep space capability then let’s go to a planetary body, likely the moon unless a massive increase in NASA’s budget allows us to go to Phobos and Mars. If that isn’t feasible within forthcoming budgets then lets eliminate the deep space element of manned spaceflight entirely and go everywhere with robotic spacecraft, including Europa, Uranus, Venus, Titan and Neptune. At the trajectory budgets are going we won’t be able to launch to any of these places within the next 20 years, so given the obvious I would prefer to devote our effort to unmanned missions.

One remarkable aspect of this mission is the fact that so many (possibly all) NASA centers seem to be behind it. The ducks are all in a row, the cat herd appears to be moving in the same direction. Will the House follow along? Will the Senate (plus president) carry the day? I suspect this is simply the opening round of a negotiation where ARM is a bargaining chip. What would the plan's supporters sacrifice to see this happen? What would the House give up to stop it? This story isn't finished yet. The horsetrading has barely begun. As for the merits of the mission itself -- asteroids certainly have the potential to be useful stepping stones. There are companies out there right now who plan to extract useful materials from them, materials that would benefit our existing $300B-per-year space industry, as well as having some value delivered to the ground. These materials would also be of great benefit to both robotic and human spaceflight. In fact, having these materials available near the top of Earth's gravity well may be an enabler for ambitious human spaceflight. With consumables (fuel, air) and additional radiation shielding, asteroid material could be used to dramatically extend Orion's mission potential. It could be used to allow SLS to be scaled back without serious impact to our overall capabilities. With additional fuel delivered on-orbit, a robotic Europa mission could be far more elaborate than if it were launched "wet" from the ground. Fuel from asteroid material and accessible on-orbit gravity-tractor mass would also be handy for planetary defense, providing benefits for those capabilities, too. All this is completely separate from the benefits to NASA that would accrue from getting a human mission into the news again. Robots are nice, but the constituency for spending billions on exploring places we explicitly say we're never planning on going is not nearly as big as scientists like to think.

The only other alternative destination in the short term is the moon. To do that would require billions to develop the Lander and ascent vehicle. Additional money the government makes obvious they won't allocate. The first launch of the SLS is 2017, why not do something with that launch? This mission is cheap, uses and test already developed technologies, and tests technologies that could enable commercial asteroid mining, as well as a nearby destination to test technologies. Could also test asteroid deflection technologies.. That seems more of an aside to me though. Even if the money for a Lander on the moon was allocated, it wouldn't be developed by 2017. If the alternative is to do nothing, then why not?

How is this uninspiring? For the first time in our history, rather than being passive explores (observing more than anything) we are going to go out and move an object to orbit around the moon and study it! I believe it would be an invaluable experiance and very inspiring.