We Need Space-Based Detection of Threats, but NASA Shouldn't Pay for It

I made a quick visit to Washington, D.C. this week to cover the American Geophysical Union's (AGU) Science Policy Conference, which aims to get scientists to think about their role in public policy and how they can help influence and serve those who make it.

A session of particular interest focused on low-frequency, high-impact (get it?) events, including asteroid collisions, coronal mass ejections, and tsunamis, i.e. megadisasters. Any of these events could cripple infrastructure and threaten the lives of millions of people.

Eddie Bernard (previously of NOAA) showed how policy changes can lead to direct improvements when dealing with tsunamis. In 2006, the U.S. Congress passed the Tsunami Warning and Education Act, which improved tsunami detection in the pacific in response to the  devastating Indonesia tsunami two years previous. 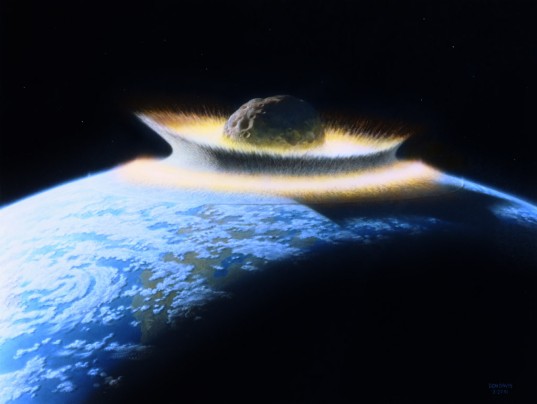 During the first few hundred million years after oceans appeared on the young Earth, life may have repeatedly begun only to be erased in planetwide sterilization events as very large planetoids were colliding with the larger worlds. In time the frequency and sizes of impact events dwindled, allowing stable conditions for life to develop over billions of years.

As a result of this law, the U.S. expanded tsunami monitoring throughout the pacific, developed international cooperative agreements to share this data with Russian tsunami stations, as well as create flood maps of pacific coastal areas, signage directing people how to react to tsunamis, and so forth. It has proved to be extremely effective in providing early warning and clear directions for evacuations out of flood plains in Hawaii after the Japanese tsunami struck in 2011.

However, as a commenter in the audience pointed out, the active solar missions are primarily science-driven and are set to end in the next ten years. Few replacements are coming their way. Asteroid detection funding has improved, but it does seem to be at odds with NASA core mission of exploration, which it has received so little funding for so long. The only proposed space-based asteroid detection telescope is proposed by the B612 Foundation, a nonprofit organization, and crucial follow-up data which determines exact orbits of near-Earth asteroids are supported by our own grant program.

NASA's core mission is (and should remain) that of exploration. Other agencies, like NOAA, are responsible for monitoring weather, and that should include space-based monitoring of solar weather threats. Maybe the USGS should be responsible for NEO detection, and NASA (or private industry) can act as the contractor for space-based detection systems. This would be similar to how it works with NOAA to provide weather satellites, though obvious improvements are needed in how that relationship functions. Well crafted policy and careful implementation would be crucial.

Of course, this all comes down to the money needed to support an expanded space-based early warning system for major threats. We've seen that effective systems are possible with tsunamis, but difficult to get Congress to pay for unless a disaster strikes first. Space based threats are bigger, less likely to occur, and more expensive to maintain, a bad place to start from when trying to create solutions.

Casey, I think I disagree. There are three reasons to find and track near-earth objects: Protecting Earth; for space development purposes (ie their resources), and for science. The last two are clearly within NASA's bailiwick; and the same process of finding them for those two purposes can work for planetary defense as well - SO LONG AS NASA GETS THE MONEY FOR IT. Our common concern, I think, is that Congress will continue to underfund the effort, or require NASA to steal the funds from other programs. Now the actual threat mitigation mission - eg, NEO deflection - should not be primarily a NASA function, but have the agency in a supporting role. Congress previously directed the Administration to decide on who's in charge of mitigation, but the Administration has refused to make that decision.

Casey, I agree totally. In fact it drives me crazy when I hear people whining about NASA cutting its "education" budget! Why should NASA be spending anything when we have a Dept. of Education with a 69 billion dollar budget.

I agree with D. Hunstman here...

Keep NASA aggressively focused on Science and Exploration. Distractions are just that.

Defending the planet from asteroids is a priority of nations, not a burden to thrust on non-nation organisations. The US government can work through NASA or set up a completely different agency, but the later is less cost effective.