If we started today, how long would it take to get to Mars? With this budget, never.

Congressman Bill Posey (R-FL) leaned forward as he asked his question of the House Science Committee's guest panel, "If we started today, how long would it take to land a human on Mars?"

Tom Young, on the panel, laughed a bit and asked, "With today's budget for NASA or the Apollo-era budget?"

"With the current budget," answered Young, "probably never. With Apollo-era, maybe by 2025."

This is the searing problem at the core of NASA today: what is the agency's mission, especially regarding human spaceflight? If it's to land a human on Mars, why is Congress and the Administration effectively making it impossible? If it's not, then what is NASA's mission?

The House Science Committee today held a hearing to discuss this very topic, which is partially addressed in their newly proposed draft of the NASA Authorization Act, which sets policy for the space agency as well as funding caps. This bill would not actually fund NASA, just limit how much could be spent. It also states the general direction of the agency and other expectations for individual programs, reporting, etc.

In that regard, it's a rough bill. According to a summary released to SpaceNews, the committee would approve a mere $16.8 billion to NASA for the next two years, maintaining its current sequester amount which is about $1 billion less per year than requested by the White House, and $3 billion less than what was approved in the previous authorization bill in 2010.

"The stark reality is that if we fail to reform mandatory spending, discretionary funding for space, science, and research will continue to shrink," said Rep. Steven Palazzo (R-MS), Chairman of the Space Subcommittee.

What's he talking about? Well, take a look at the animation below. It shows the percentage of the U.S. budget devoted to "mandatory" (i.e. dictated by law and not subject to yearly congressional approval) in gray and the rest of the U.S. budget in red (defense) and blue (everything else). Note how the colored parts shrink over time:

As mandatory spending in the U.S. has grown, it has take over a larger percentage of the federal budget, putting pressure on discretionary spending, which funds all scientific research programs.

Mandatory spending tends to be popular and politically very difficult to alter. Think about recent debates regarding Social Security, Medicaid, and Medicare for examples.

But, as the graph shows, and what Rep. Palazzo was talking about, is that this growth will crowd out other spending if Congress intends to actually reduce overall spending. And discretionary spending cuts affect two areas that we care very much about: space exploration and scientific research.

The two witnesses at the hearing, Dr. Steve Squyres from Cornell University and former NASA Goddard Director A. Thomas Young spoke repeatedly about the consequences of diminishing budgets but stable (or increased) commitments.

"NASA is being asked to do too much with too little. Unless program content can be matched to budget, the result will be wasted effort and delay," said Squyres.

There was clear tension between some of the Republican and Democratic members on the committee. 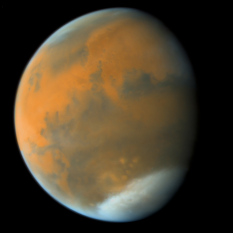 "I am concerned however, with several aspects of this draft bill, and I question whether, in the end, this draft will serve to ensure our nation's hard-earned leadership in space and all the inspiration, discovery, international standing, and economic benefits that such leadership brings," said Rep. Donna Edwards (D-MD), the ranking Democratic member on the Space subcommittee.

This was echoed by Rep. Eddie Bernice Johnson (D-TX), the ranking Democratic member on the Science committee, "I regret to say that if enacted, it would not help NASA meet the challenges facing the agency. In short, it is a missed opportunity to position NASA for excellence, and it's a bill that if enacted would lead to the erosion of the capabilities that have made NASA such a positive force for progress."

Additional criticisms from Dr. Squyres and Mr. Young focused on the crippling cuts proposed to Earth Science, concern as to whether Congress was micro-managing the agency by inserting arbitrary requirements for lunar exploration to the bill, as well as questioning the necessity of lunar exploration to begin with.

Neither witness was a supporter of NASA's Asteroid Retrieval Mission, which would redirect a small asteroid into the vicinity of the Moon for future human exploration. The House NASA Authorization bill explicitly forbids NASA to pursue such a mission.

NASA is standing at a crossroads: there is so much possibility for our future in space, but funding levels, inner conflict, and a lack of direction and leadership all stand in the way of this great era of exploration. The House has made their intentions clear, which is that NASA should return to the Moon and that NASA will have less money to work with when they do so. The Planetary Society considers this an ill-fated and expensive diversion from the ultimate goal of exploring Mars (see our 2008 roadmap for human spaceflight) and we are very concerned about funding levels for NASA in general.

The Senate has yet to weigh in with their draft authorization bill, which will come out in the next few weeks. Expect it to fund NASA at a higher level and include funding approval for the asteroid retrieval mission, among other likely differences.

These two bills will have to compromise on some level. But their differences are great and Congress has not shown much of a willingness to work together lately. One hopes that NASA is still the bipartisan program that it has been in the past, uniting those with disparate beliefs with a common goal of exploration, scientific discovery, and hope for the future.

Maybe then NASA will have its singular goal, and maybe then we will start down the real road that will put humans on Mars. Until then, our robotic emissaries wait for us, rolling daily over frigid landscapes seemingly devoid of life, human or otherwise.

1) Senators & Reps are elected to represent the people of the districts from which they were elected in their respective chambers. That is not just their purpose under America's democratic system, but their duty. Representative Brooks's threat that you refer to can therefore be viewed as nothing more than a Congressman doing his job: looking after the interests of the citizens whom he represents. Whether he should have been doing that so openly on that committee is another issue. However, the fact that he did so does raise the question of what your reaction would have been had the Representative whose district encompassed (say) JPL been on that committee and at some point issued a threat of his/her own: namely, to vote against the bill unless more funding was given to JPL and its unmanned planetary science programs? Was there no one on the committee prepared to come to the defence of planetary science? Or at least prepared to give some indication of support for rectifying the Administration's proposed cuts. 2) I gather nobody asked whether the Asteroid Retrieval Mission (ATM) was going to be a one-off mission (like the Apollo-Soyuz Test Mission) or the first of a series of related missions (as part of a planetary defence program, say). That is to say, what the long-term objective was of having an ATM. 3) "…a roadmap for human exploration of Mars." I presume you mean a roadmap for how to get human beings TO Mars--as distinct from one for what they will be doing once they are already there. 4) US officers with fixed terms do exist. One example: the board of governors of the Federal Reserve. They are appointed for 14 year-terms. You alluded to one perspective of fixed-term offices. Another is that fixed terms would (potentially) give an office a degree of independence (==backbone) from political interference it might not previously have possessed. On budgeting, sayt. Whether the NASA Administrator should or should not be such office certainly deserves debate.

Did they mention anything about the unmanned test flight of the Orion command/service module in six months? Is this going to be a major project or just a waste of money?

@Stephen: 1) Of course, of course. I just found the scene somewhat more clarifying of your point than usual. It's not a critique of Rep. Brooks. Planetary Science comes out extremely well in this authorization, so there wasn't much discussion about it at the hearing today. I'm working on another post that goes through the details of the draft bill, which includes an authorization of $1.5 billion for Planetary Science, an extremely good number, and one we felt compelled to issue a statement about: http://www.planetary.org/press-room/releases/2013/planetary-society-statement.html 2) Correct. Very little discussion of ATM at all, really. 3) Yes, correct, for getting people *to* Mars. I assume there will be exploring done once they get there, but I'll update the post to reflect this. 4) I agree with you completely. I was more trying to get across the point that *any* effort to reduce power/influence from the Office of the President (or conversely, from any other branch of government) will be met with resistance -- the President likes to appoint their own people to the job! A longer-serving Administrator could bring more consistency to the agency, but it also means that we could be stuck with a bad Administrator for a longer time, and not get a "restart" -- for good or ill -- when general administrations change. Real consistency and independence would happen when NASA gets multi-year appropriations, but no one's talking about that yet. We should encourage debate. That's why it was strange that none occurred during today's hearing.

@Messy: Squyres mentioned it once in context of the slow development of the human exploration program. As to your second question... the answer to your first part is I would say Orion is already a major project, getting around $1 billion per year. As for the second part, that really depends on how it's used in the future, and whether it serves the purposes needed by NASA. We just don't know yet. Hopefully not.

The US government has lots of money if they can afford to give 85 billion dollars either a year or a month to the investment community and banks for not much return. I would hope Nasa could get more money for the Space Launch System. Has anyone seriously investigated the possibility of co-operating with the Europeans since it used to be said going to Mars should be an international project? Also how much money would it free up after 2018 when the James Webb telescope is supposed to be built and launched?

If Congress is determined to insist that NASA "goes to the moon", then they should give them a proper, worthwhile task to perform there. Like gradually placing hundreds of modules on the super-radio-quiet far side, to form the most sensitive detector theoretically possible in a near-Earth environment, so we can answer a truly worthwhile and publicly popular question: "Is there intelligent life out there?" Unlike even 20 years ago, this mission would now be VERY well supported by the public. Everyone has heard of the possibilities. Kepler has validated the case. Junking the asteroid-retrieval is a good decision. But, for heaven's sake, let's start focusing space expenditure, whenever possible, to try to answer the 2 questions that everyone now wants answered FAR above all others: that's the one above, plus: "Is there any kind of life out there?". The latter also means missions to Europa and Enceladus, etc, as a next step.