Download This One-Page Summary on the Threat to Planetary Science 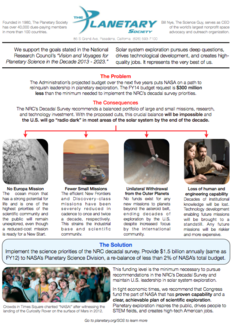 Planetary Society One-pager on the 2014 Budget

On one page we state the problem, solution, and consequences of the disproportionate cut to NASA's Planetary Science Division in 2014. Great to leave with your representative! Click to download PDF.

When we visit legislators or staff members in Congress we always provide them with a "leave-behind" to reinforce our position.

This tends to be a one page summary of our reason for visiting, which right now is about stopping the proposed cuts to NASA's Planetary Science Division in next year's budget.

It's a dense page, since there's a lot to talk about, but I'm pretty happy with it. Please download (1.2 MB PDF) and share this with family, friends, or even your local representatives. It's a high-resolution PDF, and it will look great when printed by a quality color printer.

If you have any questions about individual points, don't hesitate to ask!

NASA and other science organizations are the coolest things our government does. NASA has more twitter followers than ANY other government agency. Why would they want to reduce funding on the one thing that we are doing right? Reducing funding for NASA should be off the table. They should be increasing their budget. (Oh, other top 5 government agencies on twitter include CDC and Smithsonian. Don't mess with science!)

But, the NASA budget is $2 billion higher this year than it was when the financial crises started in 2007. An increase of about 12% over only 5 years. During a severe recession. That's the kind of numbers congressmen see and they think that a further cut by 12% of the bloated NASA budget would balance things back to a normal level. Abandoning manned space flight and launch vehicles altogether (in favor of the competitive growing domestic international markets for such services) would easily rescue everything else, like interplanetary sciences and the great space telescopes.

Tor's last sentence is so right.

@Tor: Don't forget about inflation. The purchasing power of $15 billion in 2007 is equivalent to $16.8 billion in 2013, which just happens to be NASA's post-sequester budget this year. (Source: http://data.bls.gov/cgi-bin/cpicalc.pl?cost1=1500&year1=2007&year2=2013) It varies by Congressperson how often they get this, but I do have a lot of faith in their staff, who without fail I have seen to be very sharp on these issues. So you can really consider NASA's total budget to be flat or slightly higher, even though they now have to support the SLS/Orion/Commercial Crew programs. The JWST is the primary driver of budgetary pressure within the science division of NASA, also something that wasn't expected in 2007. The Society (and I personally) believe that human exploration is a crucial component to space exploration, and without human beings in the mix, NASA (and the world) would suffer as a whole. That's not to say that money is perfectly prioritized, but we don't think we can (or should) write off that part of NASA.

@Tor Larsson: With all due respect, abandoning NASA's manned spaceflight program would be an act of mad folly. When President Obama ended the Constellation project just exactly how many of the dollars saved from that particular cancellation wound up funding (unmanned) planetary science or "great space telescopes"? I would also point out that ending US governmental funding for manned spaceflight would (presumably) mean the end to US governmental funding for the ISS, which would (again presumably) be either de-orbited or sold off to somebody else, presumably some private corporation.. If de-orbiting were to be its fate, or the ISS were to be sold to the Russians (who have Soyuz to service it), then given that the ISS is currently the one and only destination for manned missions, private or otherwise, that would amount to killing the current market for private manned spaceflight, at least until such time as some other destination--eg Robert Bigelow's proposed orbital hotel--is lofted into orbit. Even when such a private facility does eventuate, it would still be just one lone destination. The days when there are dozens of such destinations up in space for "competitive growing domestic international markets" to service would require mass market space travel, and that is surely decades away. Japanese construction firm Obayashi reportedly has plans for a space elevator which might be used for such purposes, but the completion date the company is aiming for is 2050.