More Evidence for a Habitable Mars from EGU 2013

NASA's Curiosity rover has acquired further evidence that Mars's atmosphere was once dense enough to support liquid water on the surface.

According to Sushil Atreya, co-investigator of the astoundingly complicated Sample Analysis at Mars (SAM) instrument, Mars has lost a "tremendous amount" of its atmosphere – around 85% to 95% – over the course of billions of years. The original atmosphere would have been warmer and heavier, providing conditions suitable to sustaining liquid water on the surface and an environment habitable to potential life. 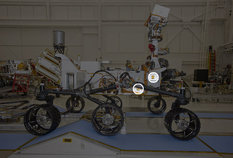 Location of the SAM atmospheric gas inlets on Curiosity

Curiosity's Sample Analysis at Mars (SAM) instrument has two atmospheric gas inlets, located at the front starboard side of the rover body.

Curiosity measured the ratio of two isotopes of Argon, Ar36 and Ar38, and found that a significant amount of Ar36 was missing from Mars's atmosphere. Since Argon is a non-reactive noble gas, a lack of Ar36 implies that it was caught up in a larger process of atmospheric loss. Ar38, a heavier element, is held more tightly to the surface of Mars due to gravity, and is lost at a much lower rate.

The exact cause of atmospheric loss on Mars is not fully understood. NASA has hope that MAVEN, a new Mars spacecraft that will launch in November of this year, will shed light on this process.

Other stray observations from the Curiosity press conference:

Curiosity is now fully recovered from its glitch and is now working off of its B-side computer. The A-side now serves as a backup. Engineers still do not fully understand why the A-side's memory became corrupted, sending the rover into safemode and stopping all scientific observations, but they have isolated the offending area of memory and are confident that the remaining space on the A-computer is enough to serve as a proper backup.

ChemCam has zapped its laser over forty-thousand times on the surface of Mars on over fourteen-hundred different targets. A notable, though not particularly profound, discovery is that Martian dust is ubiquitous over all surfaces. "The first shot is always dust," said Sylvestre Maurice, deputy Principle Investigator of ChemCam, "even the calibration target had dust on the first shot." This includes even the newly-drilled holes into the rock John Klein: Martian dust quickly coated the fresh surface.

Curiosity's Personality is that of a Laboratory

So stated by the Principle Scientist, John Grotzinger, explaining Curiosity's methodical, plodding pace since landing, and why we won't be arriving at Mt. Sharp any time son.

Nice! The Ar isotope ratios looks to be a nice (nicer) test of the similar D/H ratios of the atmosphere. But more profound, since it is harder to loose Ar. This will make any find of organics much more interesting. [/drums fingers while the lab plods on]

It looks like Gale Crater is the next dig site. Paleontologists and others start thinking how the next class of rover should be built to do archaeological work.