Staff and representatives of the Planetary Society continued to petition Congress for restored funding to NASA's Planetary Science Division in January by traveling to Washington, D.C. to meet with congressional staffers, legislators, NASA representatives, and other policy experts. The Planetary Science Division, fresh off the success of the Curiosity rover, faces a disproportionate cut of 21% from its budget this year.

I traveled to Washington, D.C., during the dreary month January in our continued effort to press Congress to restore funding. Reversing these cuts is the top priority policy issue for the Society right now, and it continues the work we began last year when the 2013 budget was released.

I personally met with staffers responsible for NASA and space policy for Rep. Judy Chu (D-CA) and Senator Dianne Feinstein (D-CA) to remind them about the damage these cuts could cause to one of NASA's most successful and popular programs. Both staffers were receptive.

Bill Nye, our CEO, met with Lamar Smith (R-TX), the Chairman of the House Committee on Science, Space, and Technology (which authorizes funding for NASA), a few days later and shared the same concerns.

We both emphasized the fact that there are truly amazing missions that could be sent to Europa, Venus, Titan, and asteroids in addition to Mars. Increased funding would support a major mission to Europa and an larger number of exciting smaller missions (in the vein of the GRAIL lunar gravity mapping mission or MESSENGER to Mercury). It's amazing how much we can do for so little. The Planetary Science Division is also extremely successful and productive

The Planetary Society's goal is to restore funding to $1.5 billion per year, which is what the program received in 2012. That's an increase of $309 million from the proposed level, which amounts to a little less than 2% of NASA's total budget.

Congress already apportioned some funding back last year, but it never passed a budget, and these cuts went into effect on Oct 1st, 2012. They will take up the 2013 funding again in March, when the current "continuing resolution" that funds the government expires.

We're focusing on the 2014 budget, which will be released sometime in the next few weeks, and Congress will begin debating shortly thereafter.

The Planetary Society will be upping its financial and personnel commitment to advocacy work this year. Many more trips to Washington, D.C., are planned as well as improved online tools, information, and outreach efforts. We're working hard to represent you, and we'll continue to fight for a bright future for NASA's planetary exploration program.

We'll continue to keep you posted. 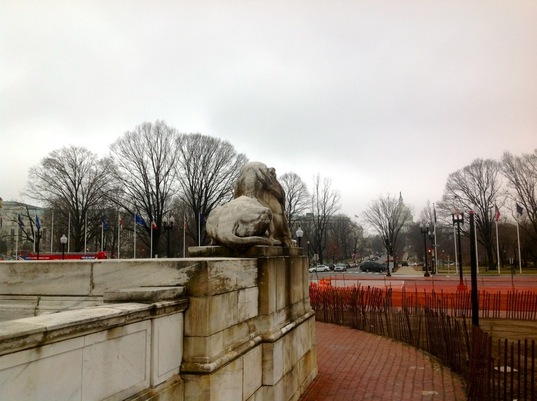 The Capitol dome as seen on a dour January day in Washington, D.C., taken from a recent advocacy trip by representatives from The Planetary Society.

All the best Casey and gang at TPS.

Thanks for the update. I used to live in NOVA (Northern Va.). While you are there next time take a day and ride the rails, Subway/Metro. See the sites and the Air & Space museum (on the Orange/Blue line). Have fun too!!