It's not just NASA. All of space science feels the pinch of smaller budgets.

NASA's planetary science division is not the only space-related agency to suffer budget pressures. Monday's National Science Foundation Town Hall at the American Astronomical Society meeting painted a bleak picture of funding for Astronomy research in the United States. Current funding realities are forcing them to choose between funding the scientific community or maintaining telescopes that provide them data.

Like any good discussion about budgets, we need to spend a little time defining divisions and sub-divisions within the NSF and how they support astronomy, as well as how the NSF is allowed to use the money Congress provides it.

The NSF is responsible for the majority of non-medical scientific research funding in the United States. When I say research funding, I mean money that supports individual scientists and engineers in their research efforts in a wide variety of fields. The NSF also provides funds to develop and maintain certain facilities that provide data for these scientists to do research on.

Like NASA, the NSF is split into subdivisions that each have their own line item within the budget. The relevant one for us today is the AST (Division of Astronomical Sciences, which I realize is not an acronym, but it's the proper shorthand). The AST's budget request for 2013 is $244 million dollars, or about 3.3% of the total NSF budget. A full $10 million of this is marked for a specific educational research program, so the functional amount the AST has to work with is around $234 million.

As reported on last year, this is significantly less money to work with than the astronomy community expected back when they put together their own Decadal Survey, which represented a community consensus of the priorities in the field back in 2010. 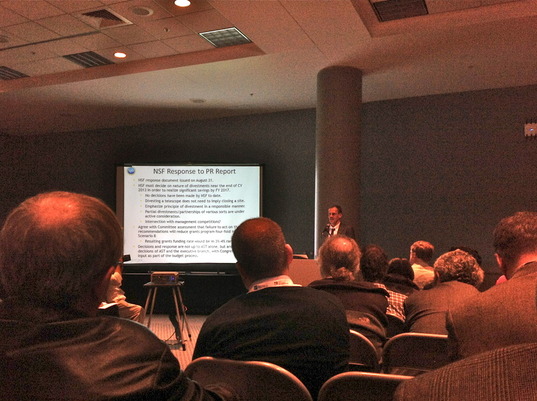 Just like Planetary Science, the Astronomy community needs to balance support of existing infrastructure, support of scientific research, and construction of new facilities that will provide the data needed to answer the big questions in the field. For example, the AST is building a big new array of radio telescopes called ALMA, located in the high and dry Atacama desert in Chile. This new array will form an exquisitely sensitive and powerful telescope, and it will help to answer lots of big questions about the universe, but it's expensive, at least compared to running existing facilities.

As we reported earlier in the year, due to the construction of new facilities in a budget that will remain flat at best, the AST has to spend less on something (the NSF thought it would have a lot more money to work with a few years ago when this project began). That something was recommended to be existing facilities, and a report [pdf] recommended "divesting" from some pretty major sites, including the Green Bank Radio Telescope and the Very Long Baseline Array in order to build ALMA and continue support of the community via research grants.

James Ulvestad, the Director of AST, held a "town-hall" event at the American Astronomical Society's 221st meeting on Monday to discuss the budget and the proposals to divest. He emphasized that the report was, so far, a recommendation, and not the law of the land. He did seem to suggest that AST would look for partnerships and pull large chunks – but not all – of their funding. It's a rough place to be, since without a growing budget there are no good choices. If they choose not to divest from the facilities, the only other place for money to come from will be grants to individual scientists, which falls very heavily on the scientific community and could potentially drive many people out of the field for lack of funding.

Ulvestad made the point that last year, AST received over $248 million in funding requests, which is more than the total AST budget for all research and facility management and construction. There is just no way to even come close to funding the majority of proposals they receive, and it will just get worse.

The decision of what will be cut be made later in the year.

Here's my small editorial note: this is why policy matters. This is, fundamentally, a very small amount of money we're talking about given the size of the U.S. federal government. I won't even try putting it in percentage terms because it's so small it's essentially a meaningless number. Increasing the budget for the NSF is one of those items that most voters don't communicate the importance of to their representatives, and most representatives don't think much about. The problem gets lost in the noise of all the other issues legislators have to face every single day, despite it being something people of all political persuasions tend to support. It's not a hard problem to solve. It's hard problem to get people to want to solve.

The "not enough money" issue is being heard in all circles. The only thing left to do, in order for us to 'Do Everything', is to reduce the costs of these projects, and not by simplistic cuts in funding. The same plan which described in my infinite visions posting "Do Everything", right here at The Planetary Society, can be applied to any type of project. In fact, I have recently secured funds and manufacturing assistance to build a prototype, utility independent remote research habitat, a good first deployment would be for NSF in Antarctica. Fuel/food cost savings in a single research season should equal the cost of a habitat. The next year, more habitats can be built from further savings, and in 3-5 years of expansion, NSF Polar Program could be saving tens of millions of dollars each year. This is just one example.