A Bittersweet Day for Planetary Exploration

NASA announced its newest mission today, a geophysical explorer of Mars called InSIGHT (an acronym for the mouth-numbing INterior exploration using Seismic Investigations, Geodesy and Heat Transport). It’s a really exciting scientific mission which will place a seismometer on the surface, bore a probe five meters down into the Martian soil to measure heat flow, and use a clever antenna trick to very accurately measure the wobbles of the Martian orbit.

This is great. We’re going back to Mars. Curiosity will NOT be the last mission to land on the surface of another planet for a generation. We only have to wait four years.

But, it’s a bittersweet day, too, because the choice of InSIGHT means that two other truly fantastic missions were not chosen: 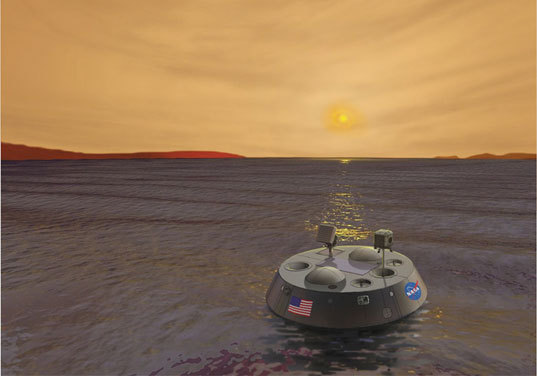 This mission would’ve landed a boat on one of Titan’s methane lakes. Do I need to explain this further to fully express how amazing this would’ve been? A boat on a Saturnian moon? It sounds like science fiction.

Well, I guess it still is. 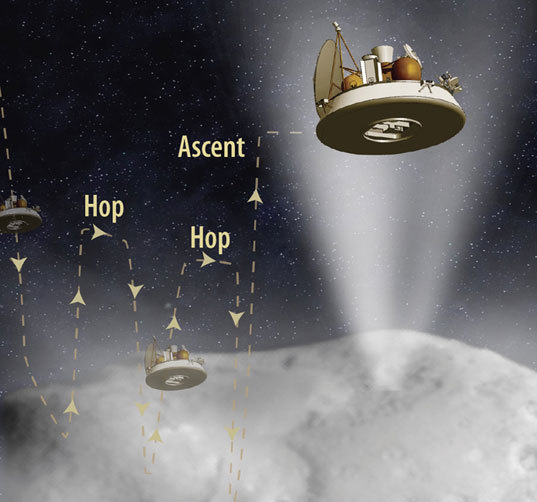 This proposal would’ve sent a probe to comet 46P/Wirtanen that would land multiple times in multiple places on the surface. The probe is both a lander and an orbiter. It would settle on the surface for a bit, then launch back into orbit, hang out, then settle down in another place for a closer look. The gravity wells of comets are so small that it wouldn’t need much energy to pop back out into orbit and land multiple times.

These Missions Are Cheap

All of these missions are Discovery-class, meaning they represent the cheapest missions NASA funds to the planets. Each one of these was projected to cost less than 500 million dollars for the lifetime of the mission, i.e. around $100 million/yr or less, depending on the length of the mission.

Things are so bad that right now NASA cannot afford to fund more than one Discovery mission. Beyond today, it can’t even fund any future Discovery-class missions until 2016 at the earliest. Why? Because of the proposed cuts to NASA’s planetary exploration budget.

There didn’t need to be two teams of disappointed scientists today. There could have been three teams celebrating the future of exploration and incredible science. It could have been Mars, Titan, and a comet. We as a nation could have been celebrating our ability to pursue the most exciting science in every corner of our solar system. What a wild and heady time it could’ve been.

Instead, we’re grateful to have one mission and saddened at the loss of the other two. Not because they couldn’t be done, but because we couldn’t pay for them.

This is where I remind you that it doesn’t have to be this way. We all need to make noise to our representatives in congress to say that we want to explore our solar system.

Please. Write, email, or call your representatives and tell them that we shouldn’t have to choose between Mars, Titan, and comets. Tell them to fund NASA and planetary science.

The worst part about TIME not being selected is that now we have to wait until 2040 - due to Earth setting in 2025 from Titan's perspective- for another opportunity to launch a lake lander on a Discovery budget. If we're lucky enough to get an outer planets flagship in the next 15 years (and that's nowhere near a given), it will certainly be to Europa according to the Decadal Survey, which has an Europa mission as #2 underneath Mars Sample Return. I also feel that internal NASA politics had a lot to do with this decision to choose inSight over the other two candidates: the Mars science community is larger, more vocal, and has the synergy of working towards learning more about a planet that has been declared by Obama to be a target for human exploration. So the outer planets, and especially Titan, are neglected in favor of Mars, Mars, Mars!

Low risk, low reward, alas. Three of these mission should be flow at once to triangulate the seismic signals. I still like to wonder how much a clone of MSL would cost. Mawrth Vallis beckons.....

Sorry, Casey - I think you are right on 1 out of the 3. We have the technology, definitely. We don't have the will because the politicians (that the country voted into office) want to keep themselves and the rich becoming richer. And, that leads me to the money, which is, of course, directly related to the will. The tax rate for the rich needs to get BACK up to where it was before Bush came into office before we have enough funding for these things. As long as we are so shortsighted that the country continues to vote the way we have been, we will continue to be a dollar short (or a few billion dollars, anyway). Our politicians make the Ferengi seem like they spend lavishly.

The boat on Titan would have been GREAT!

@Zorbonian: Exactly! But the thing I'm saying all along, is that the way I see it, the electorate in the US seems to be in tragic situation: Obama cuts planetary science and space exploration and wants to cut even more in the coming years, and Romney wants to lower the tax rate for the rich even more! So, what's people's choice here: the bad or the worse? I don't want to be a bringer of disaster, but whoever the US chooses this November, the result might end up being the same: people will get screwed again!

I should have said you are right on 1 and 1/2 out of 3 - since we do have the money, but it is already earmarked for "pork" and unneeded subsidies. @Leonidas, you are right - we will get screwed again, as usual. The problem is that we have the 2 parties in Congress bickering all the time and not really cooperating. This is why I said if the American people were really smart, we would get rid of both parties and get in one that works for the American people, not against us. The Republicans pander to what is known here as the "Bible Belt" - if you look up a map of the blue and red states, you will get a pretty good idea of where the bible belt is located. They say things like, "the other person doesn't share your values. He/She is pro abortion!" (You notice that they don't say "pro-choice".) So, Mr. and Ms. Average in the bible belt say, "Well, that's terrible - my values don't allow anyone to be pro abortion (once again, they are not thinking "pro-choice"), so Mr. and Ms. (very often not all that well educated) Average votes Republican. And the Republicans are laughing all the way to the bank while they put the country into even MORE debt as they give themselves more tax breaks and do away with any government oversight and regulating agencies (agencies that are usually to protect our health and well-being), but they will continue to expand the defense budget. The national debt has gone up more - adjusted for dollars - during Republican administrations than during Democratic ones. So, unless there is a Democratic majority in Congress, then it is VERY difficult to get anything done that will benefit us - including bringing the tax rate for the rich BACK up to where it should be.

@Zorbonian: Yes, your analysis is right on the spot! And those politicians are so much clever on making the people react emotionally rather than rationally on issues that are not issues at all. They talk about "pro-abortion" as if it's the devil incarnate or something, and that's something they have to fight because it's not "christian" or I don't know what. And the conservative religious folks just cling to their emotional conditioning and fear and react as if Satan himself is on the government. Things like that happen all the time here in Greece also, and it has become something more of a bad joke really. Meanwhile, those same people can't get to grips with reality, and face the real problems, like those you mention. If more tax cuts for the rich pass, then people will be really screwed for good. But when they wake up, it may be too late...