Curiosity and the Media: A Response

There were many great comments to my last post talking about the the misrepresentation of cost of NASA’s Curiosity rover, but one stood out that I feel the need to respond to in greater depth. Here it is (printed in full save one final sentence that was a greeting):

“I really want to like this, because I agree with almost everything you say. But as a reporter, this blanket condescension of "the media" really rankles. If you cherrypick your news sources, sure, it looks like The Media has all swallowed one narrative. But "the media has all swallowed one narrative" is also a narrative to swallow. Neither are true. Anyway, the solution can't be for reporters to just stop asking "can we afford this?" The public is probably thinking it, and it's our job to answer those questions. Sometimes journalists ask questions we very well know the answer to because we want it to come from a more authoritative voice. (I unfailingly get better quotes when I pretend I don't know any physics.) Your suggestion at the end for how scientists could respond is a useful way to move the conversation forward -- scientists can actually shape how "the media" tell their stories, and I think have a responsibility to do so. But trust that some of us know what we're doing.” - Lisa

I wanted to post this because Lisa is spot-on when she calls me out for my own lazy attack on “the media”.

It’s true, I grouped a variety of types and sizes of media sources into one statement, ignoring the differences between, say, New Scientist and the Wall Street Journal. I was not careful enough in my language and unintentionally dismissed the hard work of many journalists who present space news with the highest order of professionalism. And honestly, my intention was not to write a diatribe against the media, though I admit the post essentially reads that way. Even using the phrase, “the media,” brought in many more overtones that got in the way of my point, and thank god I didn’t use something like “the mainstream media” anywhere.

The reason I brought up the media in the first place was to express my frustration with a particular style of reporting on NASA missions which seems to be to be very prevalent in most major media outlets. Again, I don’t want to use “mainstream media” here, because that muddles the issue. What I’m trying to focus on is the largest media outlets that reach the broadest segment of the public. It is from these sources that most people in the country will hear about NASA missions. Most public judgements about the validity, viability, and value of these missions will be formed from the infrequent stories about NASA that follow a major mission milestone (like a landing) and temporarily pop up above the information noise of everyday life.

But these sources tend to generate the stories that relentlessly emphasize the cost of each mission. This isn’t because of some agenda on their part, but from what I see as a fundamentally lazy approach to telling the story. The price tag becomes a basic physical attribute of the mission, requiring repetition in any description: “NASA’s 2.5 billion dollar rover...” or “the 2.5 billion dollar mission to the Red Planet...” and so forth.

The number is almost always given without context, and very few other subjects in the news receive such a prominent numerical treatment of their cost with every mention. This endless repetition of cost is surely one of the driving factors behind the public’s erroneous perception that NASA’s budget represents an enormous fraction of federal spending. It also creates a feedback loop, where sure, journalists are just mentioning the price because that’s on everyone’s mind, but it’s on everyone’s mind because they are constantly told about the price.

To get some cursory data on the problem, I plugged the following two queries into LexisNexis, a database that provides high-quality searches into news stories:

I restricted the dates for stories to after 2005 (pretty much when MSL was on the radar as a project) and to all English news sources that represent newspapers, magazines, or transcripts of news reports.

The results are revealing: 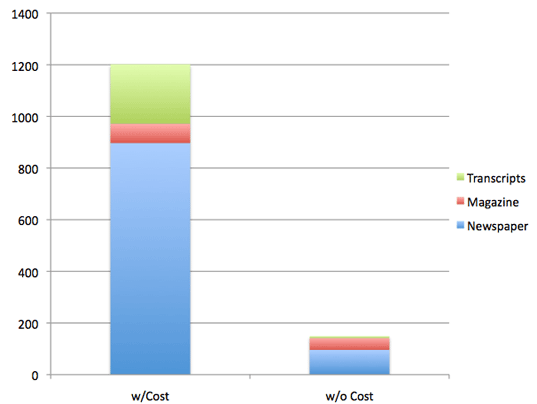 This breaks down the number of newspaper articles, magazine articles, and news transcripts from the LexisNexis results of the two queries mentioned above. The totals are 1202 referencing the cost and 149 articles that do not.

This cursory data shows that articles that mention Curiosity’s cost are eight times more common than articles that don’t mention the cost. Does this not seem excessive?

What I want to change, and this is the real point of my previous post, is this attribution of price to every single mention of the mission. Articles and stories that discuss the history of or funding debates behind the mission certainly deserve discussion of the cost, but not a mission update or a newly-announced scientific discovery. For example, you aren’t always reminded of the State Department’s budget ($50 billion) every time Hillary Clinton makes a foreign policy visit. Why? Because it’s not the point of the story.

Lisa’s post was helpful, in that she does suggest that scientists *can* change the direction of news stories by how they emphasize their facts. This brings me back to my original plea:

Scientists need to be confident that they earn the funding they have and deserve more. They should never shirk away from defending their budgets.

"The number is almost always given without context" Yes. Once again, a fair context would be comparison to budgets of NIH and NSF for example, or generally discretionary non-security government spending, specifically in research and science. I'm not sure you'd actually really want to draw a lot of attention to how disproportionately large planetary science budget is, in that context.

I dont want to make this into a back and forth argument but the $1.5B is misrepresentation too: Total "Science" under NASA budget is at solid $5B, plus cross a proportion of cross agency support funds ( $3B ). With total agency budget at $18B, of course. If you show this to layperson, and contrast it to say total federally funded cancer research, it's hard to get an enthusiastic response. NSF science, all schools that it covers, $7B vs NASA $5B for space science ? Different people will see different value proposition here, but i think quite a few would say that NASA is disproportionately well funded. And projects like JWST with the $8B and climbing price tags .. again, i'm not sure you want a lot of informed media spotlight on the issue.

I'm not meaning to be all negative all the time regarding this issue, but I am not one to be able to articulate very well the benefits of space science. What we need are more people like Joe (in the other post about what a bargain space science really is) who are able to explain logically and intelligently the economics of it - explaining how the cost either zeros out, or produces a net financial gain in our economy in the long run. Compare this to a lot of other things that have negative effects on our economy: tobacco subsidies, for example, are a drain on the economy by getting people sick with debilitating diseases, lost days at work, and long and expensive hospital stays. But the American media conveniently stays away from that. Even regarding the JWST, $16B would STILL be a bargain compared to the enormous waste produced in other sectors.

Unfortunately, we are not a very bright public that hears only what we want to hear, and reacts to it accordingly. And so it seems that we will be heading down a very stark and dark path once again. And it won't be enough to say "I told you so" because by now people should know better than to shoot themselves in the foot. I guess this is probably why most people don't want to live forever: we get sick and tired of seeing society making the same stupid, shortsighted mistakes over and over again.

Your Lexis/Nexis search results are very telling. The overall ratio of 8 to 1 proves the point, but a more thorough analysis of the results should also weight the numbers based on the audience size for each of the outlets. The number of mentions in transcripts (broadcast media) is fewer overall I'm sure because of the ratio of broadcast to other media types. Taking just broadcast media, it looks to me graphically that the ratio is much much higher. Factor in the audience size per mention and the effect becomes even more extreme. This just adds salt to the wound you have already exposed. As for funding, I think it is also important to dig deeper into the details there as well. If the numbers used for comparison are annual budget, then make a distinction between that number and the cost of an individual mission. Since the MSL project lasted 10 years or so, then the annual cost of that mission was 250 million. Also, when taking into account cross-pollination of agency funding, you could likewise take into account any other technical advances that resulted from the research, development, testing and deployment of the MSL mission. I don't claim to know for a fact that there were spinoff benefits, but I would bet my lunch money on it. For the next budget cycle. Point being, the calculus behind these arguments should be thorough enough to produce meaningful, consistent cost/benefit numbers. Although, to harken back to your point, this is, unfortunately, way more than can be fed in a sound bite.

"If you don't control the Media, THE MEDIA WILL CONTROL YOU" In some sense, the blame could be on NASA/JPL. Fiscal Pressure is a reality, so this media question on "pricepoint" should have been anticipated. If they had put out some press-releases to deflect this issue, perhaps the Media wouldn't have been so focused on cost. Performance/Price (RoI/Return on Investment) would have been an effective argument. Example: Integrated Circuits (& the whole Silicon Valley industry) can be traced to the Apollo space program, trying to miniaturize electronics. There are many other spinoffs from 60's NASA "push to Space". Asa matter of fact, there is a spinoff company outside JPL, which created cellphone cameras!! With all the cameras on MSL, why wasn't THIS in a NASA/MSL press-release?? Instead there was an CNET article on how "wimpy" the 2M pixel MSL camera is! Here is a favorite quote of mine "In order to Push the Limits, sometimes you have to EXCEED THE LIMITS" (from Formula 1 racing). Space Exploration puts pressure on Innvovation/Technology, for the benefit of future Economy. It creates "Emerging Markets"

I think that certain institutions in the United States are best at manipulating the "common people" into feeling and thinking in certain ways. For example, TV commercials have had tons of money poured into designing them so that the companies manipulate the most likely customer into buying their product. There are other institutions that, as an atheist, I will certainly offend if I mention one particular one, but it is never the less true. If scientists learn how those institutions do it, they will know how to combat it. The "media" (not all media, of course) caters to what they have been told by those institutions what people want to hear.