This week, the United Nations will move one step closer to an international response to the threat from near Earth objects (NEOs), in other words asteroid and comet impact. One of the committees of the U.N. General Assembly is expected, probably today, to endorse the recommendations made by sub-committees and sub-sub-committees of the U.N. for an international response to the near-Earth object impact threat.

No matter how you cut it, the asteroid threat is an international issue, for example the Earth target during a NEO deflection would cross many countries before safely moving off the Earth; and any evacuation or disaster management would require international response.  If you want formal coordination of the world, the United Nations is an obvious group to work the issue. It comes with a lot of bureaucracy and slow processes (think about other issues the U.N. deals with and you can see how those got put in place). But, it is the one place you can really get world sign off (or at least most of the world). 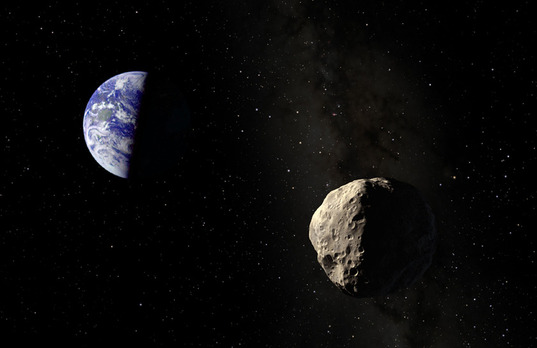 The Planetary Society is one of several agencies and groups that are part of Action Team 14 (AT-14) of the United Nations Working Group on Near Earth Objects, which is part of the Scientific and Technical Subcommittee (STSC) of the Committee on the Peaceful Uses of Outer Space (COPUOS). Whew, that is a mouthful. Each part of that mouthful has to endorse recommendations that start in AT-14, as well as at least two beyond that: the General Assembly of course, and the Special Political and Decolonization Committee of the General Assembly, also known as the Fourth Committee (no, I’m not making this up).

In recent years, the man who has headed Action Team 14 has been Sergio Camacho of Mexico. Action Team 14 consists of “players” from the NEO world, e.g., scientists, agency representatives, The Planetary Society, etc. Sergio has coordinated the AT-14 members and made sure all input was properly fed into the awesome U.N. bureaucracy, a noble, important, and largely thankless task (but here I say thanks!). Sergio has very nicely allowed me to quote from some of his emails to AT-14 and to me about where we are in the multi-year process to coordinate the international community on asteroid threat issues through the U.N. Below Sergio’s comments, you can read the summary recommendations endorsed by subcommittees and committees. These include the establishment of an international asteroid warning network (IAWN) and a space mission planning advisory group (SMPAG), both described in the recommendations below.

Sergio reports first on what is expected to happen this week:

…the projected endorsement by the Special Political and Decolonization Committee (also referred to as the Fourth Committee) of the United Nations General Assembly, of the report of Committee on the Peaceful Uses of Outer Space (COPUOS) and thereby of the recommendations made by the Working Group on NEOs of the Scientific and Technical Subcommittee (STSC) of COPUOS.

You would recall that at its 50th session, held in February 2013, the STSC endorsed the recommendations made by its Working Group on NEOs regarding an international response to the near-Earth object impact threat (A/AC.105/1038, Annex III, paragraphs 11 – 16) [which you can read below or find the entire STSC document at the STSC Online Reports archive]. I am attaching a copy of that report. This report was endorsed by COPUOS at its 56th session, held in June 2013 (Official Records of the General Assembly, Sixty-eighth Session, Supplement No. 20 (A/68/20)).

In a couple of days, probably on the 24th of October, the Fourth Committee of the General Assembly will agree on a new draft resolution on International cooperation in the peaceful uses of outer space to, among other things, set the work of COPUOS and its two Subcommittees for 2014. In doing so, there should be a paragraph in the draft resolution in which the General Assembly welcomes the recommendations made for an international response to the near-Earth object impact threat.

There is one additional procedure step beyond the Fourth Committee. That will be the approval by the plenary of the General Assembly of the omnibus resolution for the work to be carried out in 2014. That will be in early December and the GA will adopt it without a vote.

(a) An international asteroid warning network (IAWN), open to contributions by a wide spectrum of organizations, should be established by linking together the institutions that were already performing, to the extent possible, the proposed functions, including discovering, monitoring and physically characterizing the potentially hazardous NEO population and maintaining an internationally recognized clearing house for the receipt, acknowledgment and processing of all NEO observations. Such a network would also recommend criteria and thresholds for notification of an emerging impact threat;

(b) IAWN should interface with the relevant international organizations and programmes to establish linkages with existing national and international disaster response agencies in order to study and plan response activities for potential NEO impact events and to recommend strategies using well-defined communication plans and procedures to assist Governments in their response to predicted impact consequences. This does not limit the possibility of organizing, in this respect, additional international specialized advisory groups, if necessary;

(c) A space mission planning advisory group (SMPAG) should be established by States Members of the United Nations that have space agencies. The group should include representatives of spacefaring nations and other relevant entities. Its responsibilities should include laying out the framework, timeline and options for initiating and executing space mission response activities. The group should also promote opportunities for international collaboration on research and techniques for NEO deflection.

12. The groups recommended above should have their work facilitated by the United Nations on behalf of the international community.

14. The Working Group agreed that all recommendations contained in the present report should be implemented with no cost to the regular budget of the United Nations.

15. The Working Group encouraged the specialized agencies of the United Nations, member States and their institutions to follow near-Earth object developments on a regular basis, for example via the following web pages: http://neo.jpl.nasa.gov, www.jpl.nasa.gov/asteroidwatch, http://neo.ssa.esa.int and http://neoshield.net.

16. At its seventh meeting, on 22 February 2013, the Working Group adopted the present report.

Our Planetary Society board member, Neil deGrasse Tyson, will be hosting an event this Friday (Oct. 25, 2013) at 8 a.m. at the American Museum of Natural History along with the Association of Space Explorer to discuss “Defending the Earth from Asteroids.” You can follow the link to watch the live streaming of the event. It will include a number of panelists including TPS Advisor and former astronaut and planetary scientist Tom Jones, as well as a number of other astronauts (the Association of Space Explorers is composed of the rather exclusive club of those who have orbited the Earth), including representatives of the B612 Foundation.

The best thing to do with dangerous asteroids is to mine them. The raw materials could be stockpiled in orbit, or on the Moon, ready for when they are wanted in space. Danger averted, mineral wealth accumulated.