Go out and look up to see Mars.  On July 31, 2018, Mars will be closer, and therefore brighter, than it has been since 2003, and closer and brighter than it will be again until 2035.  Mars looks like a very bright, orange/red star.  For a couple months before and after closer approach it will be brighter than the brightest star in the night sky.  On July 27, 2018, Mars will be at Opposition, the opposite side of the Earth from the Sun.  That same night, near Mars in the sky, there will be a total lunar eclipse (longest of the 21st century) visible for about half the Earth (South America, Europe, Africa, Asia, and Australia).  Several other bright planets are also up in the evening sky.  What does all this mean and how do you see the cool stuff?  I’ve put together answers to the most common questions below.

What is a Mars opposition?

Mars Opposition occurs when Mars is on the opposite side of the Earth from the Sun. 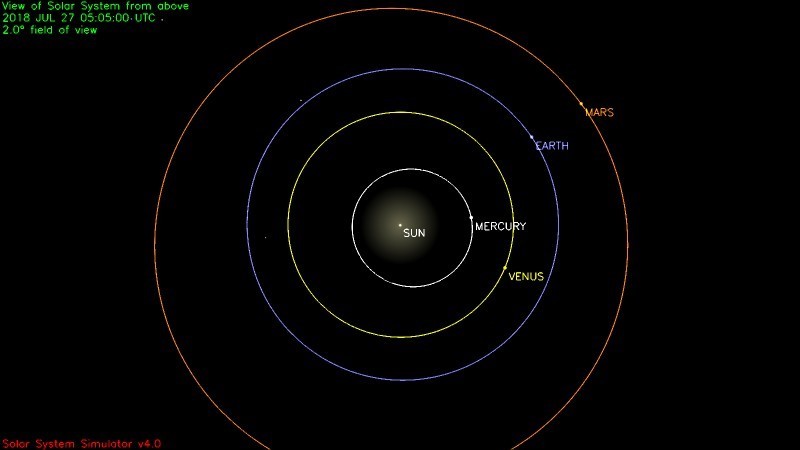 Mars at opposition, the opposite side of Earth from the Sun. This shows planet locations for Mars opposition on July 27, 2018. Note also how Mars’ orbit is much less circular that Earth’s orbit.

What is a Mars close approach?

A Mars close approach occurs when Earth and Mars come closest to each other in their orbits.  If their orbits were perfect circles, closest approach would occur at opposition.  But their orbits are elliptical, which is the primary reason close approach is separated from opposition by several days as illustrated in the NASA visualization below (for the 2016 opposition).

Where do I look to see Mars?  Or, when Mars is at opposition, where is it in the sky?

At opposition, Mars will rise in the East around sunset, be at its highest in the South in the middle of the night, and set in the West around sunrise.  Before opposition it rises a bit later, and after opposition a bit earlier.

How bright will Mars be for the 2018 opposition / close approach?

Mars will be brighter than Jupiter, and almost 3 times brighter than the brightest star (Sirius) in the night sky.  It will approach -2.8 magnitudes for those playing the astronomical apparent brightness game.  The only brighter natural objects in the sky will be Venus, the Moon, and the Sun.

How far away will Mars be at opposition / close approach?

How big will Mars be at opposition / close approach? 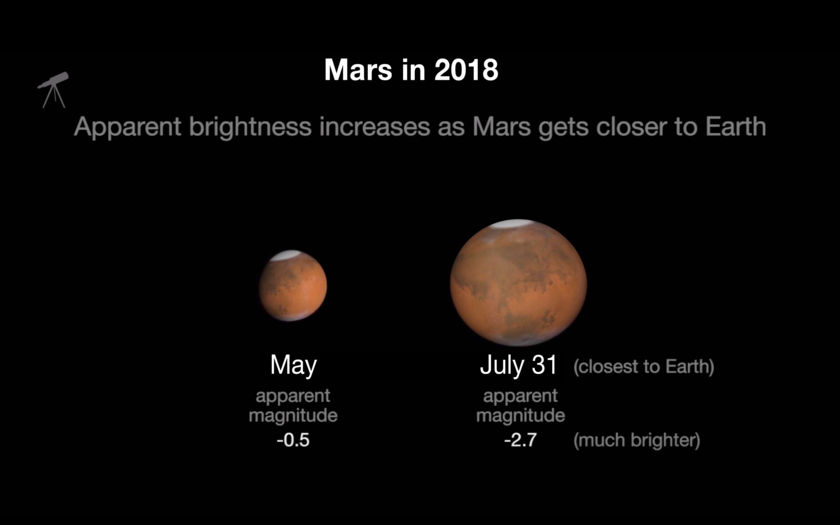 In 2018, Mars will appear brightest from July 27 to July 30. Its closest approach to Earth is July 31. That is the point in Mars' orbit when it comes closest to Earth. Mars will be at a distance of 35.8 million miles (57.6 million kilometers).

Will I be able to see the disk of Mars with my unaided eyes?

The angular resolution of the human eye is approximately 1 arc minute which is 60 arc seconds, so no.  Mars will appear as a point of light to your eyes.

Will Mars appear as big as the Full Moon?

An Internet hoax started in 2003 still rears its head saying that Mars will appear as big as the Full Moon.  The Full Moon has an angular diameter of about half a degree or 1800 arc seconds.  So, the Full Moon will be about 74 times larger in diameter that the maximum Mars disk size.

It depends on the telescope.  Through a small telescope, you will see Mars as an orange/red disk.  Through larger telescopes, features on Mars may be visible, though with the current dust storm on Mars, features will be muted or not visible.

How long is it between successive Mars oppositions?

Mars oppositions occur about every 26 months.

Mars is closer, and thus appears brighter, as well as bigger through a telescope, during some oppositions primarily because of Mars’ elliptical (non-circular) orbit.  If Earth and Mars both had circular orbits, then their minimum distance would be the same.  But, particularly Mars has a significantly elliptical orbit.  So, if Earth approaches Mars when Mars is closest to the Sun (perihelion), then Earth and Mars are significantly closer than during oppositions when Earth approaches Mars when it is farthest from the Sun (aphelion).  2018 has a perihelic opposition: Mars is near perihelion.  The cycle between on perihelic opposition to the next is about 15 to 17 years.  The last was 2003 when Mars was particularly close to perihelion so even closer.  The next opposition in 2020 will be farther away, and the next ones farther than that through 2027, then they will get closer again until the next perihelic opposition in 2035. 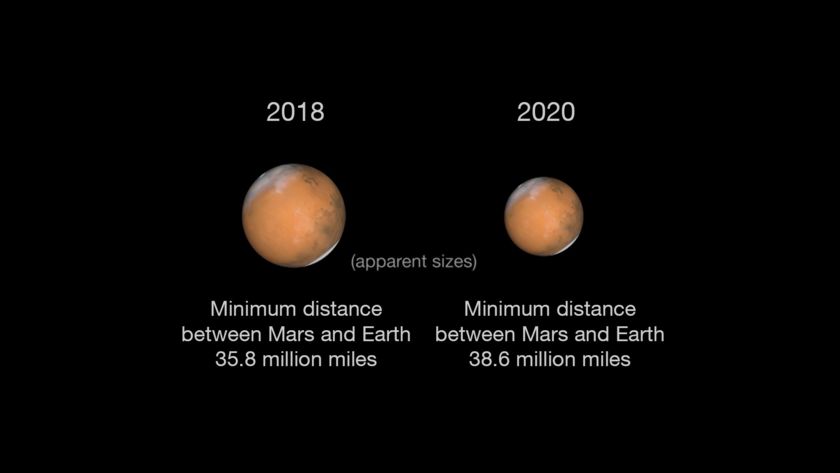 An artist's view of the apparent size of Mars during Close Approach in 2018 and 2020.

What phase does Mars exhibit at opposition?

It is “Full Mars,” we see the full day side of Mars.  Since Mars is farther out from Earth from the Sun we never see Mars as a crescent as we see the Moon or Venus, but we do see phases where we see less of the day side.

How does the distance from Earth to Mars vary between close oppositions (perihelic) and far oppositions (aphelic)?

What other factors affect the varying distances between Earth and Mars at opposition?

The main factor is significantly non-circular nature of Mars’ orbit, but there are other smaller factors.  Earth’s orbit is also non-circular, but to a lesser extent.  The orbits of Earth and Mars are slightly tilted with respect to each other.  And, particularly affecting long-term, like variations over thousands of years, are tugs on the orbits by other planets, particularly Jupiter’s gravitational effects on Mars’ orbit.  It is these latter changes that yielded the 2003 opposition being the closest in nearly 60,000 years.  It will be even closer in 2287.

How does the distance from Earth to Mars vary from its closest to its farthest? How far is Earth from Mars at conjunction and opposition?

The closest Mars ever gets at opposition is about 56 million km.  The farthest Mars gets at conjunction (other side of the Sun from Earth) is about 401 million km.  So, Mars’ distance to Earth varies by more than a factor of 7.

What is a total lunar eclipse?

How long will the eclipse last?

This will be the longest total lunar eclipse of the 21st century with totality lasting 1 hour and 43 minutes.  Totality is often closer to one hour long.

Will Mars be near the eclipsed Moon?

Yes, reddish Mars will be near the reddish eclipsed Moon making for a spectacular sight.  If you aren’t in the right part of Earth to view the eclipse, you’ll see the uneclipsed Full Moon near Mars.  It is coincidental that the eclipse is occurring at the same time as Mars opposition, but with that happening, it is not coincidental they appear near each other.  Eclipses happen during Full Moon when the Moon is approximately on the opposite side of the Earth from the Sun, and that is the same condition for Mars opposition.  Both Full Moons and Mars at opposition will rise around sunset and set around sunrise.

Why does the Moon appear red during eclipse, sometimes called a Blood Moon?

Red light makes it through the outer edges of the Earth’s atmosphere and is bent towards the Moon by the atmosphere.  See this Random Space Fact video for more.

The Red Hue of a Lunar Eclipse

Why isn't the Moon pitch black during a total lunar eclipse? Dr. Bruce Betts has this week's Random Space Fact!

OTHER PLANETS TO VIEW

What other planets are visible near Mars Opposition?

In the sky in late July and August you’ll also be able to see 3 other planets with just your eyes.  In the early evening, you can see super bright Venus in the West, then walking your eyes across the southern sky from West to East you’ll see bright Jupiter, dimmer but fairly bright yellowish Saturn, and then magnificent Mars in the West.  Venus is the brightest.  Jupiter is usually brighter than Mars but not during this period.