Thanks to The Planetary Society’s Shoemaker NEO Grant program a new telescope has been brought to bear focusing on searching for and understanding the properties of binary asteroid systems. Donald Pray at Sugarloaf Mountain Observatory in South Deerfield, Massachusetts, USA was awarded a 2013 Shoemaker NEO Grant of $8070 for the mirror, structure, and focuser for a new 0.5 meter telescope to study asteroid pairs. The studies include determining the rotation rate of the primary body and secondary when possible, the orbital period of the system, and the relative diameters of the primary and secondary. Sugarloaf Mountain Observatory contributed the camera and mount for the new telescope.

In addition to their scientific interest, identifying binary asteroids and their prevalence is useful for assessing asteroid impact threat. If and when we have to deflect an asteroid, it will be rather important to know if there is one or two. And more generally to understand these systems and their prevalence.

Not too long ago, Don emailed me with an update – the telescope is completed and up and running. Here is his report:

I'm Don Pray, one of the fortunate awardees of last year's Gene Shoemaker NEO grant. As you may recall, the grant was for the purchase of key components for the construction of an f/4, 20" reflector. After a wait of about one year, I received the mirror (in July) and integrated it into its cell and tube structures. Since it was the first cell I had ever made, there were some stiffness issues which needed to be resolved, but I eventually got it where it needed to be.

I'm happy to say that for the last two months, the system has been operating very well and I've been able to dramatically ramp up the volume of observations in Dr. Peter Pravec's campaign to find and understand binary asteroid systems. To date, the new instrument has discovered an asteroid which displays two embedded lightcurves, so the assumption is that it's a binary system. Mutual events have not been observed, however, so it isn't a confirmed find. We'll be looking at it again in a future apparition.

So I just wanted to update you on progress here at Sugarloaf Mountain Observatory. The grant was crucial in allowing me to take on this project, as without it, the total expense would have been prohibitive.

Thanks again to TPS for selecting me as a worthwhile investment. I'll do my best to make the most of it. 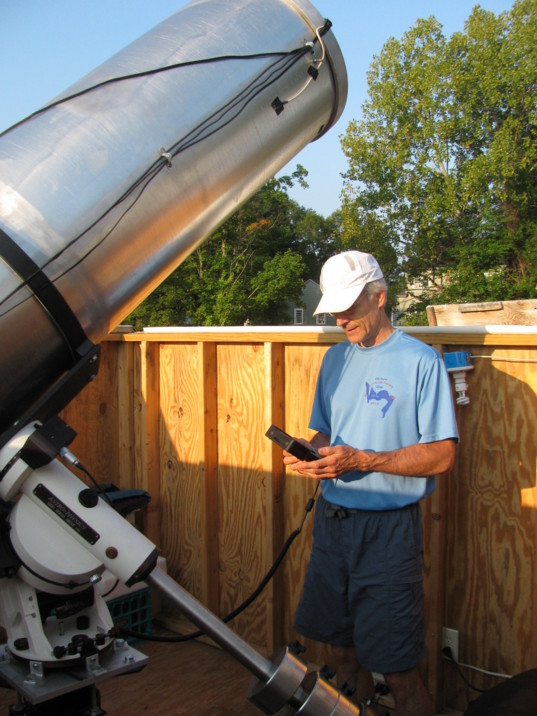 Donald Pray at Sugarloaf Mountain Observatory in Massachusetts, USA with a new 0.5 meter telescope for studying asteroid pairs. The mirror, structure, and focuser were purchased with a 2013 Shoemaker NEO Grant.