Report from the Exploration of Near-Earth Objects Objectives Workshop

This week, Jennifer Vaughn and I are representing the Planetary Society at NASA's Exploration of Near-Earth Objects (NEO) Objectives Workshop, or ExploreNOW. The meeting is being held in Washington DC. Roughly a couple hundred people from a wide range of backgrounds have been brought together at this invitation-only 2-day meeting. We are discussing the exploration of near Earth objects and asteroids, particularly future human missions to NEOs.

You can watch web streams of much of the workshop today and tomorrow. There, you can also find nearly all the presentation charts, even if you don't watch any of the web stream.

So far, there have been many overview presentations this morning. Speakers covered topics from why go to a NEO, to what the benefits would be for planetary defense and science, to results of some previous related mission and technology studies. Speakers also covered tentative plans for ways forward, including international cooperation aspects. The morning ended with an update on the Japanese Hayabusa mission, the only mission to have returned samples from a near-Earth asteroid.

So, why go to an asteroid with humans? Former astronaut and asteroid planetary scientist Tom Jones, a member of the Planetary Society's Advisory Council, gave an excellent overview of the arguments, which he broke down into 5 things:

I'm of course enjoying collecting a lot of great Random Space Facts, including: asteroid Itokawa that Hayabusa visited is only a little bit more than 5 times the length of the International Space Station. I'll have more random space facts, as well as some meeting updates on Twitter @RandomSpaceFact.

Here are Itokawa and the International Space Station as it appeared in 2007, both shown at the same scale of 2 meters per pixel: 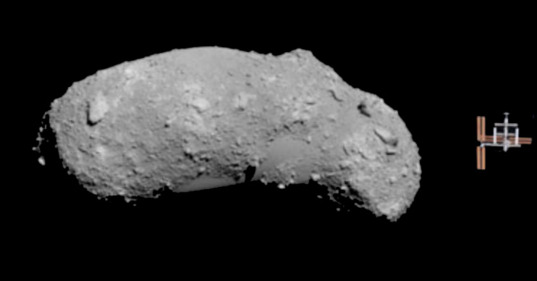