The Planetary Society sponsored the Growth of Bacterial Biofilm on Surfaces during Spaceflight (GOBBSS) astrobiology experiment on the STS-107 Columbia space shuttle mission.   It was both a science experiment and a "peace experiment" bringing together an Israeli and Palestinian student to work together on the experiment.  Dr. David Warmflash helped the students design the experiment and was responsible for brining it to The Planetary Society as a peaceful science initiative.  (He later scientifically guided our Phobos and Shuttle LIFE experiments).  As we remember the Columbia crew, here David has kindly agreed to share his reflections on that tragic day 10 years ago when the space shuttle Columbia broke apart during re-entry:

Ten years ago, today, I was waiting for the return of the Columbia, with friends and colleagues, Eran Schenker and Yael Barr, alongside the runway where the spacecraft was supposed to land. Launched two weeks earlier, the Columbia had carried the Planetary Society's "GOBBSS" experiment into space. By this time, the experiment was being called the "Peace Experiment"; we had recruited two students, one Israeli [now Dr.] Yuval Landau, the other Palestinian, [now Dr.] Tariq Adwan, to work together as co-investigators. We all anticipated the post-flight analysis of the biological cultures from GOBBSS, and from two other experiments that Eran had developed dealing with probiotic microbes.
But there was no sonic boom, no sign of the Columbia. The time to landing clock went into positive time, and we were directed to return to the bus that would take us back to the building where we had gathered earlier. Then, we learned of the tragic fate of the seven people who had made up the Columbia's crew, and we no longer cared about the experiments.
GOBBSS constitutes one of many examples of scientific projects undertaken by scientists working together from nations that oppose one another politically. Although a full and lasting peace scenario between Israel and Palestine seems no closer to fruition today than 10 years ago, we are just as confident today as we were in 2003 in the ability of science to unite peoples of opposing nations. 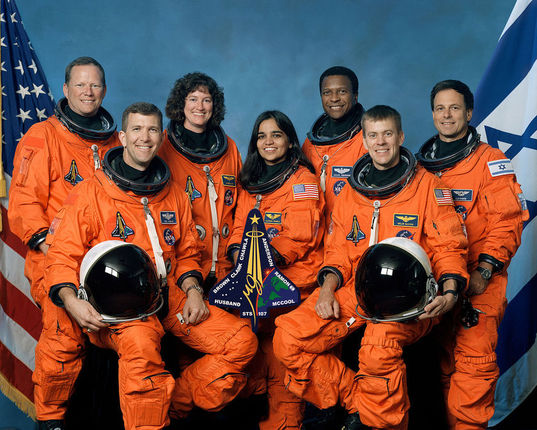