Zapping Rocks with Lasers to Save the World

In the not-so-distant future, if an asteroid is on a collision course with Earth, we might choose the Star Wars solution to that problem: dispatch several spacecraft to swarm around the asteroid and zap it with lasers. In contrast to the Star Wars solution, Red Leader doesn’t need to die at the hands of Darth Asteroid—these spacecraft would be robotic, and they wouldn’t be designed to blow up the asteroid but rather, to vaporize surface rock at just the right location to create jets of rock vapor that would gradually move the asteroid to a safe orbit. World saved, rocks vaporized, and a good time had by all.

Is this scenario realistic? That is what we are trying to find out. The Planetary Society has been sponsoring research at the University of Strathclyde in Scotland to investigate this promising but understudied possible asteroid deflection technique, often called surface ablation. Because it would involve several small spacecraft firing lasers, this project is called Laser Bees. (It used to be called Mirror Bees, but that is so last year. The research originally focused on both lasers and an alternative of using mirrors to reflect sunlight onto a spot to do the vaporizing. The mirror solution turns out to be more complex—for example, in lining up the Sun, the mirror, and the asteroid—and potentially less efficient. All hail Laser Bees, the victor. 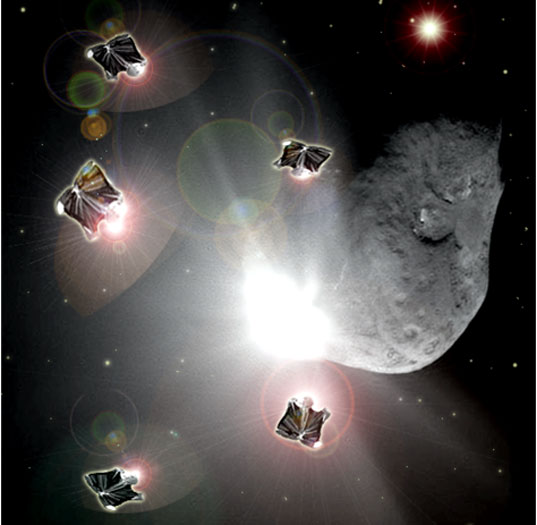 The means for potential deflection techniques for asteroids range from nuclear weapons to gravity tugs. Each has advantages and disadvantages. Laser Bees are intriguing because studies indicate they may offer the ability to move asteroids comparatively quickly. Much work must be done to determine if this really pans out, and that is where the Laser Bees project comes in.

The project is a joint venture of the Universities of Strathclyde and of Glasgow and is led by Strathclyde professor Massimiliano Vasile. His graduate student Alison Gibbings visited The Planetary Society earlier this year and presented their results to date. Using support provided by Planetary Society members, the Laser Bees team has created an elaborate laboratory setup that enables them to zap rocks with a high-powered laser, including trials with the rock in a vacuum chamber. 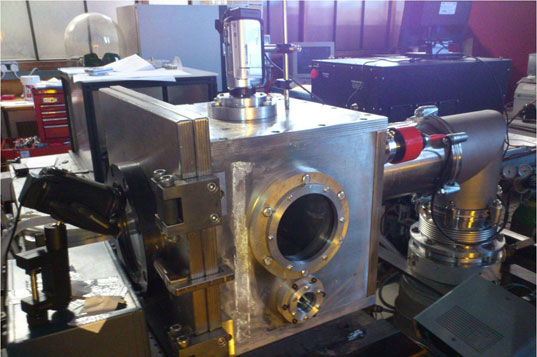 They have done preliminary tests on both solid and porous rocks, collecting ejected material on microscope slides placed at a variety of distances. They have compared these results with models and have made a variety of interesting discoveries, including that the process seems more efficient than predicted. 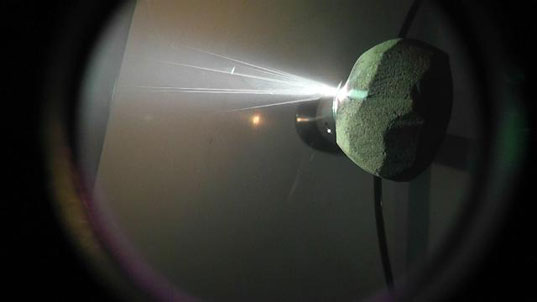 Sandstone rock during laser ablation in the lab as part of the Laser Bees project – notice the narrow conical plume of material being ejected.

Now the Laser Bees team is poised to take the next steps. These include attaching force sensors to the rocks to measure the force imparted; testing to see if heating the slides, which represent the optical parts of the spacecraft system, will limit deposition of rock material and thus preserve the efficiency of the system even in a “dirty” environment where rock is being ejected from the asteroid; and, in what should generate great video and great science, using high-speed cameras to record the development of the ejecta plume.

Porous rock during laser ablation in the lab as part of the Laser Bees project – notice the conical plume of material being ejected.

When we discover an asteroid headed for Earth— and it is only a matter of when, not if—we will want a variety of well-studied techniques that can be applied to deflect the asteroid before a regionally destructive catastrophic impact can occur. Thanks to the support of Planetary Society Members and the Laser Bees team, we are moving the process forward to help save the world.

Just an FYI to a great article... I just received a TPS letter asking for donations to keep this R&D effort going.

Orbit@home (similar to seti@home) did not get funding from NASA and has no computation downloads for finding asteroid orbits. Wouldn't that be a worthwhile project?

We always spend money on this kind of thing. It makes no sense. Planetary Defense is a Government responsibility, a World Government Responsibility. OUR responsibilty is to keep this organation alive, grow it, and advocate for Space Exploration and Colonization. Not build solar sails, microphones, look for NEA's. 6 1/2 billion people on Earth. What's our membership? We need to stay relevant so the Planet has a space option for such things. Not pay for them with our rent money!

Some more thought required here. Let us say a half mile nickel iron asteroid was approaching the Earth or a stony iron composed of a basalt of pyroxene and feldspar and some nickel iron percentage, at 10 miles per second.. That is going to be a super dense rock. I think your lasers are going to have minimum impact. If it is your intention to create enough change in the asteroid's vector, I am not at all sure that the "asteroid tails" you create will be large enough to change the magnitude and direction. I think it might be a better idea if your team practices on basalt, a glassy breccia or granite and a block of iron. It is a silly idea to practice on soft sandstone (highly unlikely to find it in space) unless you want to make the results look good. Surely lasers will simply melt the iron in situ and nothing will be ejected. Out in space there is no wind to carry the material away. Asteroids are not comets composed of frozen gases that will be carried away by evaporation(sublimation). I think you will melt both the basalt and nickel iron to the asteroid and not get any "rocket tail" or "comet tail" to change the direction. Chris Landau (geologist) 08/16/2012

I second the opinion that this should be a governmental action. I would rather see our tax money spent on "outer directed" rather than "inner directed" needs.

This is definitely something I would donate money for. I think people need to really start thinking about protecting themselves from space junk. It's good to have a plan.

Has it occurred to anyone that an asteroid is not zipping along under stabilezed flight control like a jet liner? Every movie I've seen show them rolling, yawing, and pitching simultaneously. Any continuously emitting jet a laser could create would be worthless to alter the trajectory of the asteroid.

Why destroy them? If a spacecraft were lanuched years before an asteroid's orbit brought it close to earth, would it be possible for it to carry enough fuel, perhaps nuclear, to alter the path and velosity slightly such that the asteroid would not leave the solar system and would take up an orbit around the earth, or moon, or around the earth moon system outside the orbit of the moon? Steering such asteroids into stable orbits close to earth would provide useful material for building space stations and ships for further exploration of the universe, as well as removing them as a potential impact threat for future generations.

Using solar power to vaporize materials in de surface of an asteroid concentrating solar radiation with a swarm of spaceraft each equiped with mirrors and/or lenses would be possible cheeper and safer.