NASA's LRO and LCROSS spacecraft will be reaching the Moon tomorrow (Tuesday). Check out this picture of LCROSS taken as the rocket fairing surrounding it was splitting off and being jettisoned. 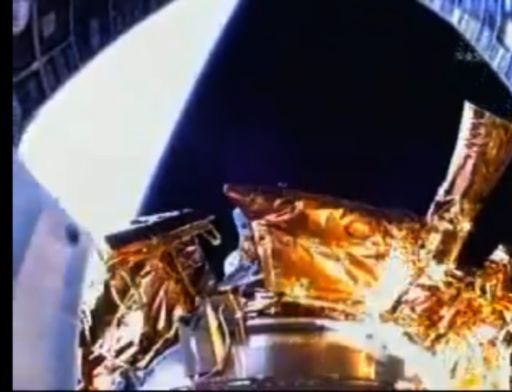 CROSS spacecraft as viewed by Centaur rocket upper stage's camera during fairing jettison. The fairing is at the top of the picture and LCROSS spacecraft at the bottom. From June 18, 2009.
RO and LCROSS separated as planned soon after launch, both heading towards the Moon to fulfill their missions. LRO will be doing lunar orbit insertion tomorrow with a burn at 2:47 a.m. PDT. Note that LRO is carrying Planetary Society member names as part of our Messages from Earth program as well as other names collected by NASA.

LCROSS will perform a lunar swingby on Tuesday to enter into an elongated polar Earth orbit with a period of about 38 days. Shortly after periselene, the time of closest approach to the lunar surface, the LCROSS science payload will be switched on for one hour for calibration of its cameras and spectrometers, and the results will be streamed live by NASA. The video stream coverage will begin at approximately 5:20 a.m. PDT. You can find it and more information at: http://www.nasa.gov/mission_pages/LCROSS/lunarswingby/

LCROSS and its attached Centaur upper stage rocket separately will collide with the moon at approximately 7:30 a.m. on Oct. 9, 2009, creating a pair of debris plumes that will be analyzed for the presence of water ice or water vapor, hydrocarbons and hydrated materials.