Here's a little background on the Planetary Society's Apophis Mission Design Competition: in 2008, we awarded $50,000 in prizes to teams who did the best job creating mission designs to tag/track the asteroid Apophis. Apophis is a roughly 300 meter wide asteroid that will pass closer to Earth in 2029 than our geosynchronous communication satellites. Depending on whether it passes through a few hundred meter wide "keyhole" at that time will determine whether it ends up hitting Earth and causing massive catastrophe in 2036. The good news is -- right now this chance is 1 in 50,000, and may even be lower based upon some presentations given at the conference. The Planetary Society received excellent entries for designing a mission that could carefully track an asteroid like Apophis so that we can better understand its orbit and if it poses a threat to Earth.

What has been striking to see at this conference is the staying power of the competition. We had hoped for this, and have ourselves been working with space agencies, advocating for consideration of the mission designs. It has been wonderful to see all three winners of the open competition are represented here. Note that all three of the prize winners were considered excellent proposals. Though the prize assignments were unanimous in our review panel, the discussions that led to the line up were long and thorough. In other words, all three were very viable mission designs.

A.C. Charania is here representing the SpaceWorks/SpaceDev winning entry. He presented the concept in detail in one of the sessions, along with follow up studies they have done including assessing new launch vehicle options, and future plans they have. They have also presented their mission concept at other conferences and in front of various space agencies. They continue to work with spacecraft designers to flesh out options for Apophis missions. 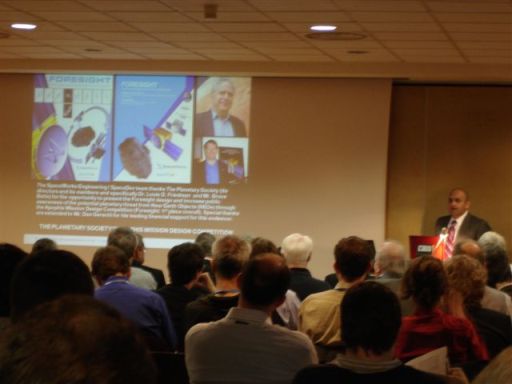 .C. Charania from SpaceWorks Engineering presenting the Foresight mission design -- which won The Planetary Society Apophis Mission Design Competition -- to the Planetary Defense Conference in Granada, Spain in April 2009.
uan L. Cano was the leader of the 2nd prize team and is here at the conference. He is from Deimos Space here in Spain, and his team included a variety of organizations from several countries in Europe. They are now involved with doing detailed Apophis mission studies for ESA, and he presented some of their results. He told me the Apophis competition caused them to move forward with their designs and plans, and has helped lead them to where they are now.

The third prize team, another large European consortium, in this case led by a team from Astrium in the U.K., is also continuing to pursue related work. I talked with Craig Brown from Astrium. He was not on the proposal team, but is working on some of the follow-on. He says Astrium continues to be very interested in studying NEO missions. In addition to mission studies, they have also spun off studies of how to take spacecraft thermal models and apply them to NEOs to study and predict the "Yarkovsky effect." The Yarkovsky effect, which sounds more like something that occurs under hypnosis, is actually something getting a lot of discussion at this conference. Differential temperatures on a rotating asteroid between its morning and afternoon sides actually causes changes to the orbit of asteroids. The effect is not well understood yet, but because of its significance for an object like Apophis, lots of people are thinking about it.

You can learn more about each Apophis mission design winning proposal on our website.