Today, I had the honor of announcing the latest winners of The Planetary Society's Gene Shoemaker NEO grants here at the Planetary Defense Conference. This year's winners are Russell Durkee of Minnesota, USA; Robert Holmes of Illinois, USA; and Gary Hug of Kansas, USA. The grants will help improve three observatories that do great work tracking NEOs, and now -- with our help -- these observatories will be able to significantly improve their efforts.

At a reception this evening, I met for the first time one of our former Shoemaker grant winners. Jana Ticha from the KLENOT Project of the Klet Observatory in the Czech Republic, who won a Shoemaker NEO grant in 2000, is here at the conference with her colleague Milos Tichy. They operate an observatory with a 1.06 meter telescope that has become one of the most prolific observatories on the planet when it comes to follow up observations of NEOs. Amazingly, they receive no national funding from the Czech Republic, though they do receive some local government funding. 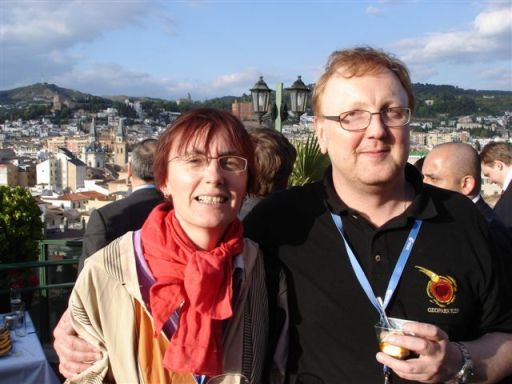 Planetary Society Shoemaker NEO winner Jana Ticha (left) and colleague Milos Tichy from Klet Observatory in the Czech Republic. The picture was taken during a reception at the IAA Planetary Defense Conference in Granada, Spain in April 2009.

It was a Shoemaker NEO grant from The Planetary Society that kicked off a series of upgrades to their observatory, starting with the optical system our members funded. They later upgraded the dome, and now are finishing installing a new mount for the telescope. The new mount will allow them to reach more of the sky with their system. Despite being located in central Europe, they told me their observatory has very dark skies and excellent seeing conditions due to its location, altitude, and local weather patterns. They also operate a planetarium in a city tens of kilometers from the observatory and carry out educational programs at the planetarium. It was very nice to finally put a face to the person I've been corresponding with for many years. This was all the more gratifying when hearing the stories of what they have been able to accomplish since the Shoemaker NEO grant several years ago. You can read past updates from Jana Ticha at our 2000 Gene Shoemaker NEO Grant Recipients page.