Is Venus the forgotten planet, or just one that's hard to figure out? Absorbing the presentations at the Venus EXploration Advisory Group (VEXAG) meeting in Madison, Wisconsin in the U.S. this week, I can tell you Venus is both. Many people around our world of space explorers seldom think about Venus. This is evidenced by the relatively small number of missions that have made the trip to the hot acid planet, and by the exiguity of basic facts about what goes on there. With Mars, it's a different story. When our robots arrive at the red planet, there's plenty to see and plenty of data to send back to us on Earth. Such is not the way with Venus, but perhaps it should be.

Each presenter I spoke with was excited to be exploring Venus but generally suffering a little frustration. Imagine us, a spacefaring species that loves to wander and transmit images, relishing pictures of exotic lakes of ethane on a moon of distant Saturn, but not knowing if a planet much closer by, that shines romantic beams every evening brighter than any star, has volcanoes erupting on its surface. Venus is a hard target -- solid rock but a very difficult place to explore. Its clouds of sulfur compounds obscure a rocky surface so hot that the acid rain evaporates before it can get to the ground.

A processed and colorized panorama from the Venera 13 lander, the third spacecraft to return images from the surface of Venus, on March 3, 1982. Data gaps were filled in by hand. Four Venera landers remain the only spacecraft to have returned photos from beneath Venus' obscuring cloud deck, two each in 1978 and 1982.

After a few papers were presented, it became clear to anyone in the audience that all of us should be thinking hard about Venus and what goes on there, especially what goes on with its weather, and its climate. It's the greenhouse effect gone wild.

Whether the researchers were arguing about the isotopic evidence for and against volcanism, or whether they were brainstorming ways to get balloon gondolas to survive a whirlwind trip in the relatively warm though low-pH super-rotation of acidic winds aloft, they all share a concern about Earth on account of their fascination with Venus. The subtext of all the Venus talk is climate change on Earth. 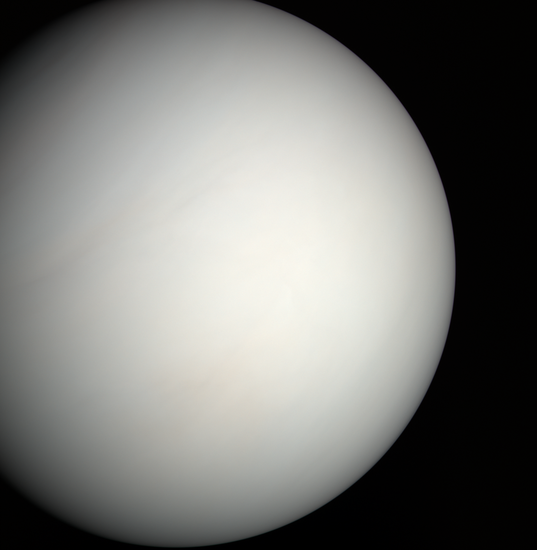 Venus in natural color from MESSENGER

This view of Venus was composed of images taken through red, green, and blue filters by MESSENGER on June 5, 2007 as it approached for its second flyby. Seen in natural color, Venus is nearly as featureless as a cue ball.

Looking at a first cut of the Venusian data, Venus is our sister planet. It's rocky, round, and about the same size as our Earth. It has fluffy white clouds. Although it's just 30% closer to the Sun than we are, it is hellishly hot, and no sky can be seen from its surface. Its rotation has been slowed to once every 240 Earth days by the astonishing tidal drag of its 90 Bar atmospheric pressure. In that dense gas mixture, the clouds spin around ten times faster than the planet they hide. For these researchers, it's the atmosphere that's brought all these striking inhospitable features to the fore of the VEXAG discussions.

Almost every paper presented carries with it concern about climate change back here on Earth. Using data gathered by Soviet spacecraft over 20 years ago, researchers are looking for evidence of lightning. Japanese scientists and spacecraft builders have Akatsuki en route to our clouded sister world. Named "Dawn," because that's when Venus is visible, it will fly into a brilliantly conceived orbit that will allow studies of the Venusian air, with light from both the planet's limb and cloud decks. Along with managing the passage of night and day, Akatsuki is in, not a surface-synchronized orbit, but a super-rotating cloud-synced route. And of course, European and North American explorers continually plan missions to know more about this hot old place.

Tuesday night Sanjay Limaye, an old friend of the Society and the organizer of the event, arranged for a public talk. Several hundred people came to hear about Venus. Jan Smit from the University of Amsterdam spoke about the geologic boundary created by the Chixculub impact 65 million years ago. He showed that it is indeed the event that wiped out most of the ancient dinosaurs. He logically tied that mass extinction to climate changes on Earth, and then to climate change on Venus. David Grinspoon from the Denver Museum of Nature & Science was next, showing the audience the clear connections and lessons to be learned from the geology of Mars, Earth, and Venus. Climate change was once again his focus. Finally, I got up and did my best to entreat the crowd to take climate change seriously and develop new technologies and save the Earth -- save it for us, for us humans.

For me, VEXAG was remarkable. Venus is our closest neighbor, yet we are not clear on what makes that world go round. Everyone at VEXAG would agree, we have to come up many more missions and methods worthy of the challenge above and beneath the clouds of Venus.