Bill Nye posted this message to his own website and I thought it'd make a great introduction to you all about his feelings about his new position here at The Planetary Society. --ESL 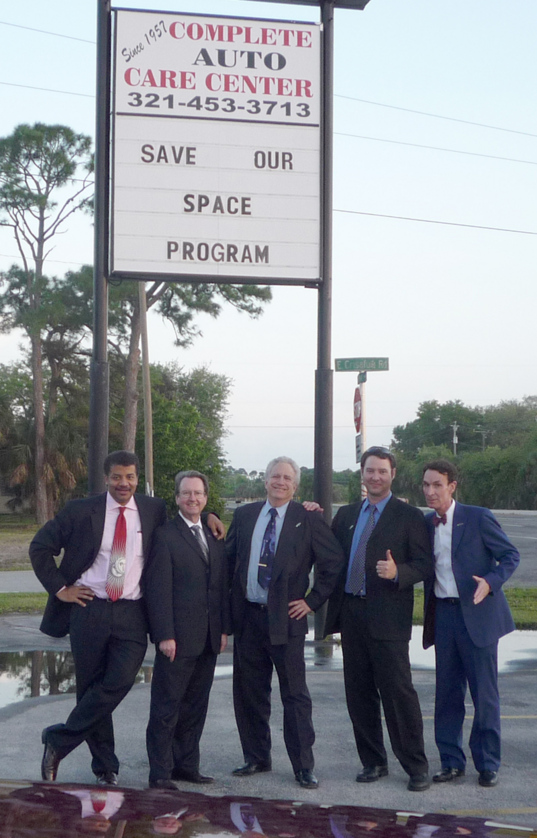 After 24 and half years as a freelancer, I found a day job. Well perhaps the day job found me.

One day, as a very young man, around age seven, my older brother Darby patiently wound the rubber band "motor" on a newly purchased Skystreak balsawood airplane, and handed the aircraft to me.

Having flown various glider airplanes for weeks that summer, we had chanced on the idea of bending the vertical tail to provide a little steering -- some yaw control.

I carefully held the plane up near my right ear, one hand on the balsa stick that serves as the fuselage, and one hand securing the propeller. I let fly. The little Skystreak flew like none of us had ever seen. It climbed, while making three graceful circles in the sky. It descended and returned to me as if it were a storybook boomerang -- right to my hand. I had produced controlled flight. I was hooked. I wanted to be an engineer.

Long about that same time, my father set up a musty telescope, given to him by his old scoutmaster. I saw craters on the Moon. My dad, by the way, had spent almost four years as a prisoner of war in Asia. He had seen spectacular dark skies. He knew his way around the heavens. So some days later, we saw the rings of Saturn.

Now, many of us have had similar experiences with stargazing, microscope gazing, or watching a dandelion's life cycle. But through what I consider remarkable luck, I ended up in Professor Carl Sagan's astronomy class. He showed us subtle mathematical features of the sky that I had only suspected but never known. He emphasized critical thinking and the scientific method -- reasoning.

Carl Sagan wrote the novel Contact that became the movie Contact. He won a Pulitzer Prize for his book Dragons of Eden.

Along the way, concerned about NASA's flagging interest in space exploration with the public's interest as strong as ever, Professor Sagan, Bruce Murray, and Lou Friedman set up the Planetary Society. It became the world's largest non-governmental space interest organization.

Well now, my friends, after 30 years on the job, Lou is retiring, and I am to become the Planetary Society's Executive Director.

What an opportunity, a chance to change the world! We are at another turning point in the history of space exploration. The United States' Space Shuttle program is finally winding down. Over 100 spacecraft have visited the Moon. Dozens of other space missions from space agencies around the world have proven that Mars was once a very wet place. It's time to look there for signs of liquid water and evidence of ancient or even extant life. By looking back into the fossil record of deep time, we have a new awareness of how much trouble a speeding space rock could cause. It's another moment in history, where we must learn more about our place in space. It's another opportunity for ordinary people to share in the exploration of a new frontier, to go beyond the unknown horizon. What a ride!

Since I launched my first model rockets, I've loved space exploration. I hope you'll take a few moments and learn about the Planetary Society. It's quite a group.

Meanwhile, I will keep on posting my commentaries on science, technology, education, and especially climate change. We'll see if we can change the world.

Thanks for your support,