The White House Science Fair and an Earful for Bolden

For the second time since becoming your CEO, I got invited to the White House Science Fair. The student projects were impressive. A few patents were issued; a few startup companies were formed; and six-figure scholarships were awarded, all to these remarkable young scientists. As a longtime science education advocate, I am gratified that the administration understands and celebrates science and the innovations it always brings. 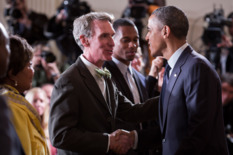 This year, several of the science presentations were outside on the White House lawn. I spent several minutes on camera with LeVar Burton, who is a very strong advocate for education and who understands its importance for the future of the U.S. economy. He and I had a wonderful time talking with the students, who, I’m sure, are the future of industry.

While we were waiting to hear the President’s remarks, I spoke for a few moments with Dr. John Holdren, the President’s Science Adviser. I also took advantage of being seated right in front of Charlie Bolden, the Administrator of NASA, who ultimately controls the 17.7 billion dollar NASA budget. We talked about piloting fighter planes and the need to control costs in any procurement of just about anything in aerospace. I kept going with the conversation and explained that we at The Planetary Society are strong advocates of maintaining the budget line for Planetary Science at $1.5 billion, or less than 10% of the big picture at NASA. And also that we are strong advocates of following the guidelines and recommendations of the Decadal Survey.

It’s an odd thing to be supported by members like you, fighting this fight for so many months, and then be given a chance to talk to The Main Man. Charlie was very receptive... or he is a very good listener. So far, Congress has been very supportive of the idea of rejecting the latest round of cuts to Planetary Science. So, with your strong support and our steady drumbeat of a clear, concise, persuasive message, maybe we are getting the job done. Thank you all.

The White house science adviser stated after the Curiosity landing that the United States was the only nation that had landed missions on other planets. I hate to say it, but John Holdren is not qualified for his position. He obviously is not aware of the many Soviet lunar and Venera series. landings. It was a sad day indeed. Science is human achievement, It took a nation to get us to the moon, and it will take the will of nations to go to Mars.

The socket has a new light bulb. Lets see if it works!

Those in power, like always in mankind's history, isn't interested in "science" for science's sake. For those, to get interested in "science" it must first give them great mammon wealth and power. So please, don't talk so much about how great science is. They don't share our enthusiasm. Use the same strategi like Columbus. Let them know instead of how much mammon of wealth exploration of space would generate for us (for them and their friends). Mammon is our great friend, to get science and progress running.

They need to make clear a National Comittment and Challenge to establish a Mars colony under a US Flag no different than Pres. Kennedy make the challenge in landing on the Moon in the 60's. I say US Flag because we don't need our people in the rumble seat on a Russian spacecraft. The US has developed the cutting edge technology, lets do it and don't let a few bucks stop us today so our children regret a bad decision tomorrow..(Fllancer2012 on SetiLive)

Science Fairs are awash with amazement. Future scientists, specialists, engineers and ecologists wait with nervous anticipation as you view their projects. As a judge for the Science Fairs for over 12 years, I have watched many continue on to the Intel (and now Google) International events. These kids never cease to amaze me and I have been honored to see some continue on to change the world. They are our future and any and all encouragement means everything to them. Congrats to Bill for attending & taking the rare opportunity to talk to a few that can make a difference in our continued efforts for space exploration.

not one nation, but all of us need to get out of the shoe drawer in the closet. we have to start to look around the bedroom and then the whole house. with the exception of 1969 when the US went to the Moon with the help of Werner von Braun's team (imported from Penemuende, Deutschland), we have not ventured forth, except with unmanned crafts or manned stations around Earth. 2013 and it's time, after almost 45 yrs of stasis that we Earthlings carry on where Werner von Braum & his German / American team of 1969 left off. Werner, you are the best !

it is wonderfull crusade that Planetary Society is making in behalf of so many important projects that eventually will save science and the future of humanity !!! congratulations

Heinz -- Thank you for stating this for the newer generation. So true are your words! .. "Werner von Braum & his German / American team of 1969"...