It is said that Washington is small town that runs on personal relationships. So last Tuesday, our Washington lobbyist Bill Adkins and I visited with Congressman Culberson (R-TX) and Congressman Wolf's (R-VA) Chief of staff Dan Scandling. We thanked them for their steadfast support of planetary science. Mr. Culberson very much wants a mission to Europa. Congressman Wolf supports planetary science, as it is what he feels NASA does best. Both of these men expressed the need to support the Decadal Survey goals and objectives. Thanks to you, we've been able to help them influence their colleagues to support planetary science as well. 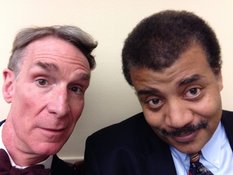 Bill Nye and Neil deGrasse Tyson snap a picture before their presentation to the House Science Committee on Feb 5th, 2013.

The week before last, I visited with Lamar Smith, also of Texas, and a strong supporter of science and space. He chairs the U.S. House of Representatives' Committee on Science, Space, and Technology. He invited another of your board members, Neil deGrasse Tyson, and I to speak to his committee. This is quite a request; of course we agreed. The meeting was behind closed doors with no press or pictures allowed. Our premise was that science education produces scientists and engineers who do research and make discoveries, which in turn leads to innovation. New ideas lead to new products and economic prosperity. We emphasized that basic research often takes a long time to bear fruit. Relativity was discovered long before Global Positioning Satellites could exploit it. Lasers were an invention without an application for years. The discovery of magnetic resonance in atoms predates the medical imagers by decades. If the U.S. stops investing in basic research, the U.S.'s economy will decline.

But perhaps more importantly, we reminded those present that history is replete with civilizations and governments that stopped exploring and saw their influence and economies diminish. The frontier of exploration today is in outer space, at destinations beyond the Earth. A remarkable attribute of everyone at the meeting is that each representative, democrat, republican, or independent really does want what's best for the United States. It's their job to see to it that basic research continues, the U.S. remains a leader in innovation, and space exploration thrives. Neil and I gave them what we feel were very compelling arguments for investment in science and space science especially. This is a vision whose roots go back to the Society's founding and Carl Sagan. With your help, we continue to make our case for planetary exploration, which will lead to discovery and prosperity.

The Planetary Society's Save Our Science Campaign

You guys are amazing. I have been given a new found interest in science. Keep up the good work!