On May 22, the SpaceX Falcon rocket with its cargo capsule on top launched from Cape Canaveral and reached orbit ready to dock with the International Space Station. So far everything is going perfectly. It’s a huge step. Congratulations to SpaceX, Elon Musk and his team. 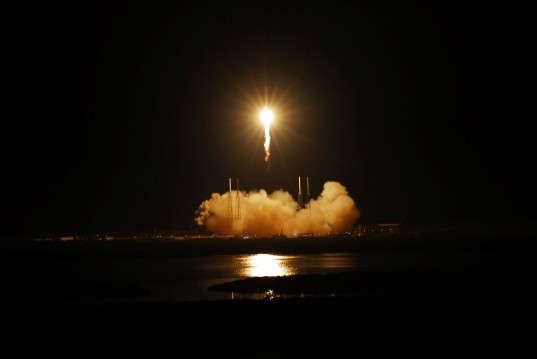 I visited SpaceX a few months ago. That day, NASA engineers and managers were watching carefully as the SpaceX technicians demonstrated that a very large diameter joint or interface seal was working. If you get off the launch pad, and that seal is not working perfectly, you’re headed for a very short trip in space. The test I watched being set ups was only one of thousands of systems and tests, and so far, all the preparation was worth it. Everything is working perfectly. Nicely done SpaceX!

I encourage everyone to take a moment and consider just how hard this sort of thing is. Your rocket has to be loaded with explosive fuel and liquid oxygen. It has to deliver that fuel into rocket engines that control the fuel flows precisely so that the rocket and its payload go into orbit, falling continuously around the world. All the systems, the valves, the pumps, the seals, the joints, the guidance computers, the gizmos that swivel or gimbal the rocket nozzles, the fins, the wires… everything has to work together precisely. And if something goes wrong, it has to fix itself in only moments. There’s no pulling over to change a tire. If it messes up, all you get is a big expensive mess. Ah, but if it works, you are taking human kind one step closer to deep space and worlds beyond.

This is a great accomplishment. It will allow cheaper more reliable access to the environment of space. It is hoped it will allow government space agencies, NASA especially, to have more resources to carry humankind further and deeper into the cosmos so we may all more fully understand and appreciate our place in space.

I really liked watching the launch of the rocket on t.v. hope that space x has more successful missions in the future.