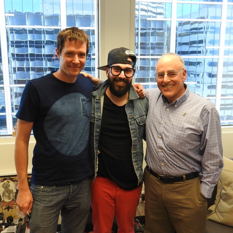 “Upside Down & Inside Out” - OK Go Makes Art at Zero-G