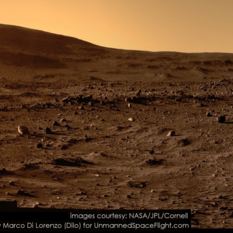 Get used to this view

Get used to this view of Home Plate and Husband Hill, because Spirit will be seeing a lot of it over the next 8 months, whenever power levels permit the rover to eke a little bit of science activity out of the day.