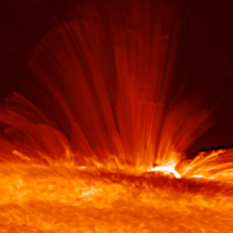 According to a press release issued this morning by the National Oceanic and Atmospheric Administration, the enormous solar flare that erupted on December 5 and 6 last year was accompanied by an intense radio burst that caused large numbers of Global Positioning System recivers to stop tracking the signal from the orbiting GPS satellites.