After the remarkably successful initial checkout phase, Dawn is now in the interplanetary cruise phase.

Now more than halfway through its 80-day initial checkout phase, the Dawn spacecraft continues to please its fans in mission control and throughout much of the rest of the universe.

Dawn's checkout phase continues to go very well. The spacecraft is healthy as it and Earth travel their separate ways, separating at almost 1 light second per day.

The Dawn project welcomes you to deep space! Dawn is operating smoothly on the fourth day of its eight-year adventure. 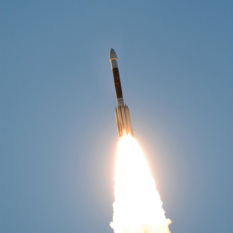 Dawn Launch: A Brilliant Flash and a Thunderous Roar!

At 7:34 a.m. EDT the Delta II Heavy roared off launch pad 17 B at Cape Canaveral with a brilliant flash of glowing orange light and billowing white smoke.

The countdown is underway for Dawn's liftoff on September 26 at 7:25:00 am EDT. This is the second time our hero has been within a few days of launch.

Dawn Journal: What to Expect After the Launch III

Now less than two weeks from its planned September 26 launch, Dawn is eagerly awaiting the beginning of its fantastic adventure.

NASA is preparing (again) to bring Dawn to the Florida skies as all systems are gearing up for a September 26 launch.

Dawn Journal: More Than One Way to Leave the Launch Pad

There are two ways for a spacecraft to leave its launch pad: climbing on a blazing tower of powerful flames accompanied by a thunderous announcement of its departure or suspended securely and gently on the crane that hoisted it there in the first place.